Tax Facts: An Illinois Chartbook – The Economy of Illinois

This issue of Tax Facts updates the Economic Overview chapter of TFI’s publication, Tax Facts: An Illinois Chartbook. As data used to compare Illinois to other state becomes available, we will continue to publish updated chapters. (For example, the February 2020 Tax Facts was an update to Chapter 2, a comparative overview of Illinois’ overall tax structure)

The Chartbook itself and this updated chapter further TFI’s goal of providing policymakers and the public with accurate and unbiased information, in an era when studies presenting data in ways that support a particular position are all too common. For example, in the interest of accuracy, the Chartbook: (1) combines state and local taxes; (2) uses gross state product to compare economic activity; and (3) presents data in bar charts to so that outlier status is easily visualized, and not merely state rankings.

Illinois faces difficult decisions as it deals with financial problems made more onerous by increased spending related to COVID-19 and the devastating impact the pandemic has had on state and local government revenues. We hope this true picture of where Illinois stands helps lead to needed solutions.

ILLINOIS HAS THE LARGEST ECONOMY IN THE MIDWEST 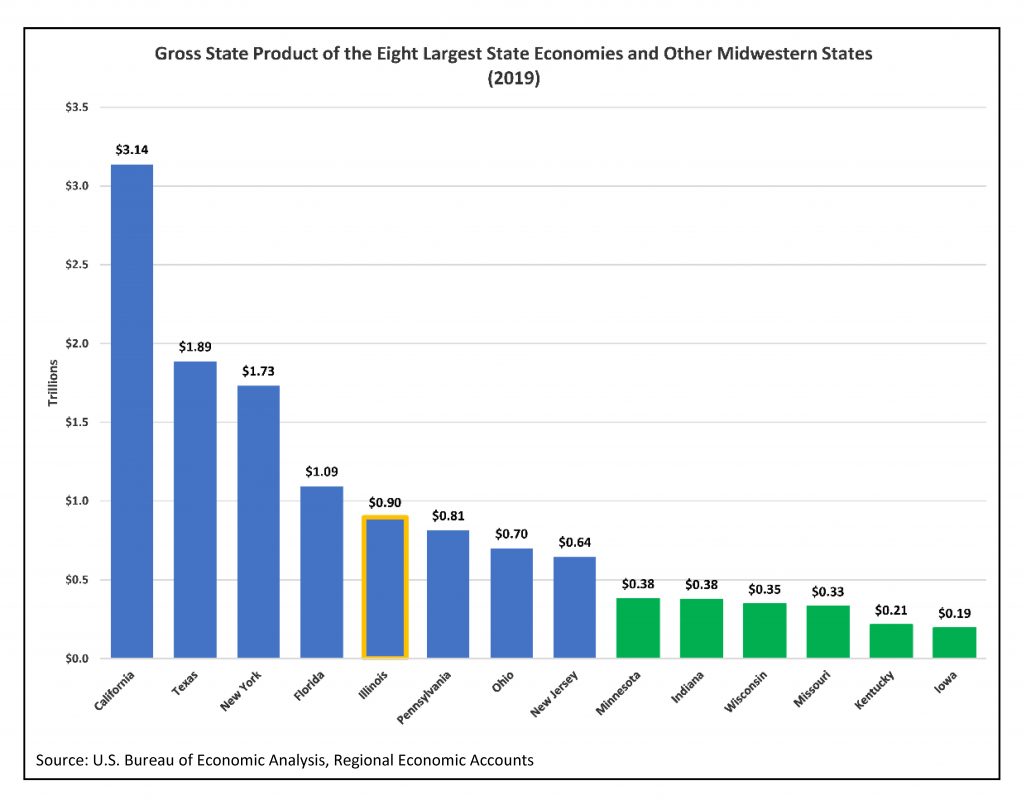 ILLINOIS HAS A DIVERSE AND GROWING ECONOMY 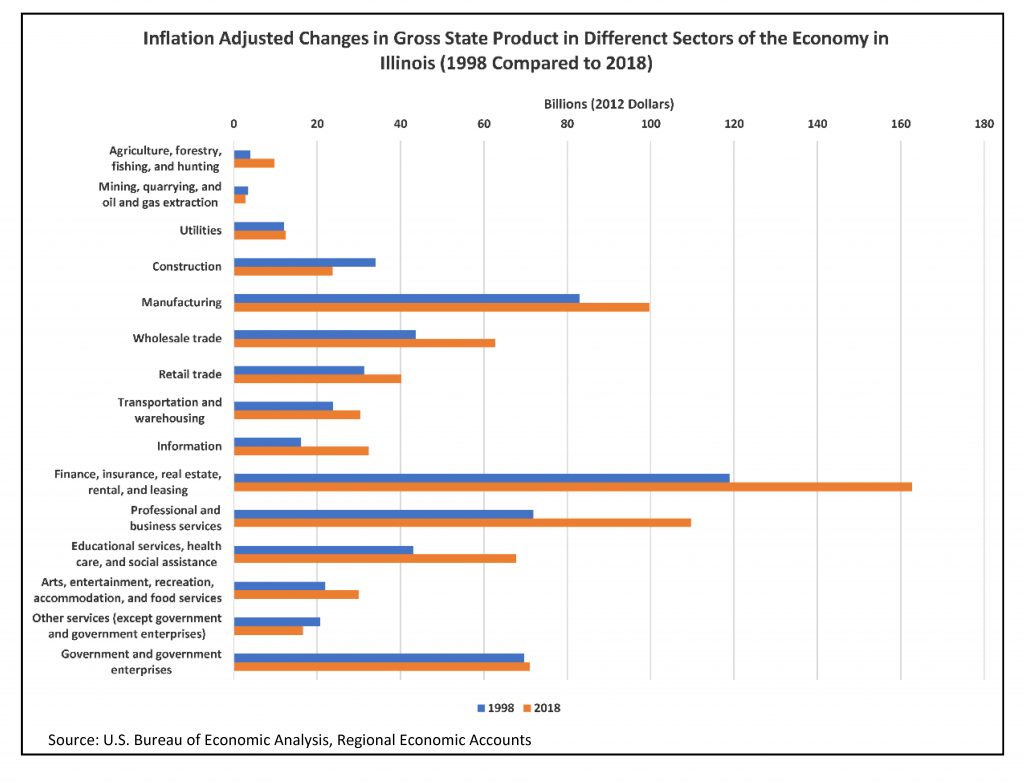 Illinois is a diverse state in many ways, including the scope of our business community. This chart shows what sectors make up the Illinois economy and how they have changed over the last twenty years. While most sectors have seen significant growth, there has been a 29% decline in construction. 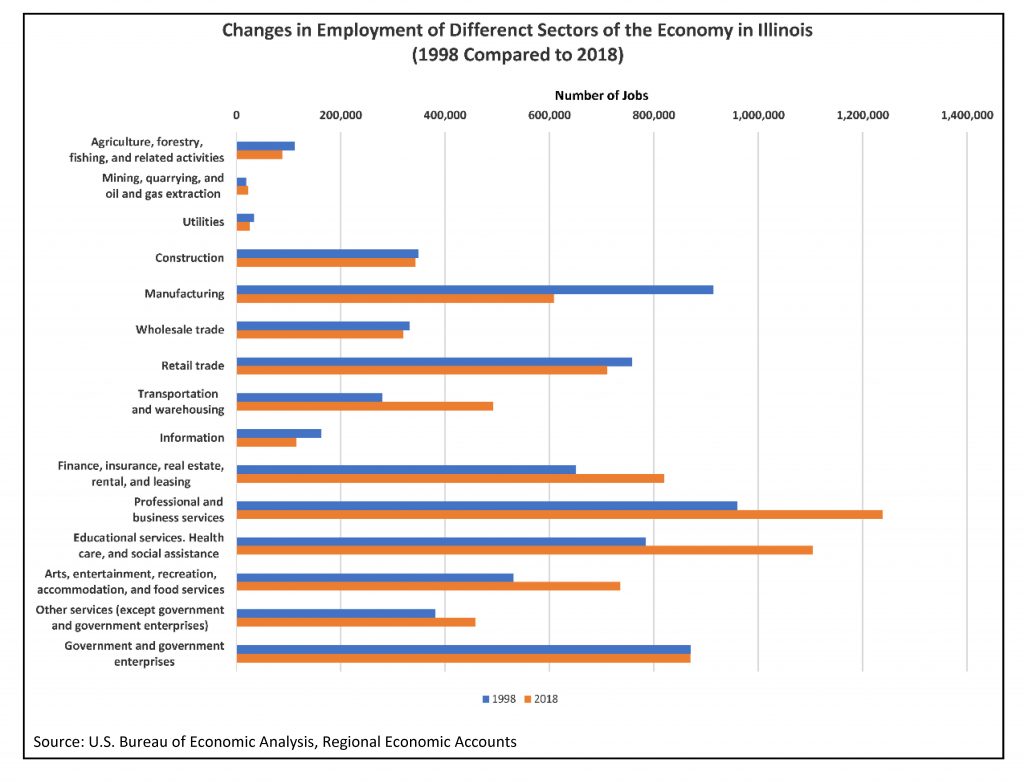 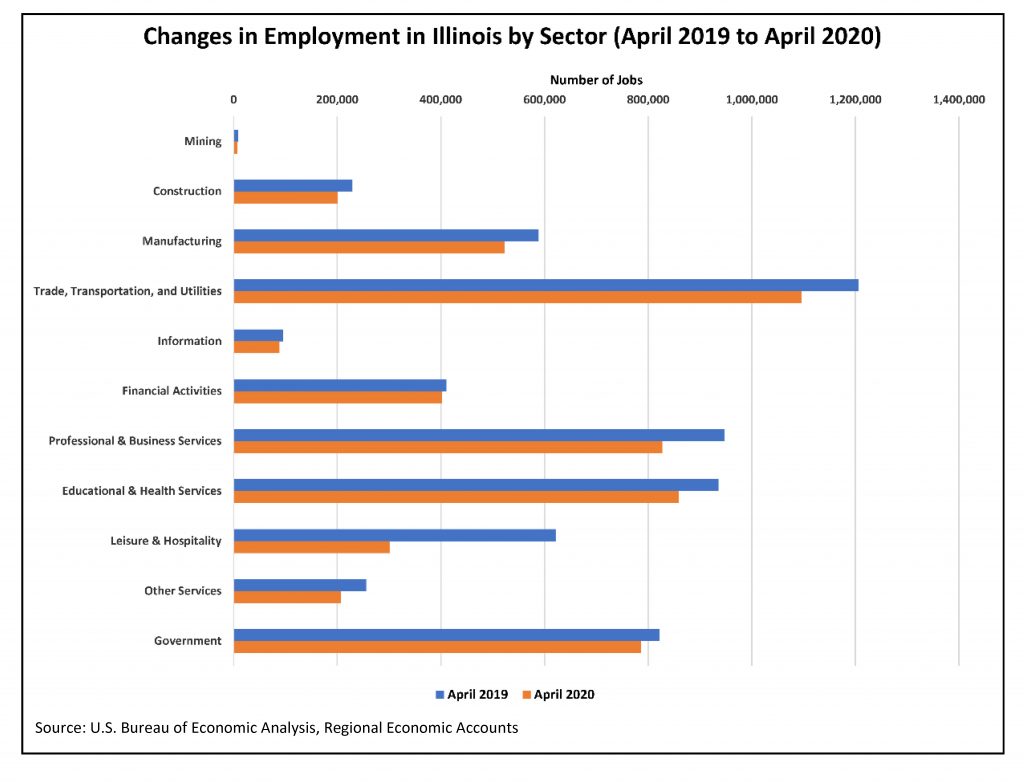 There was a staggering loss of jobs during the first full month of the COVID-19 pandemic.  While the number of people filing for unemployment made headlines, it was not clear from those preliminary reports where the job losses have been happening. With dine in service at restaurants being prohibited and tourism coming to a near standstill, it is not surprising that over 50% of the leisure and hospitality jobs have been eliminated. As time progresses, we will learn whether there will be a rapid or slow recovery. 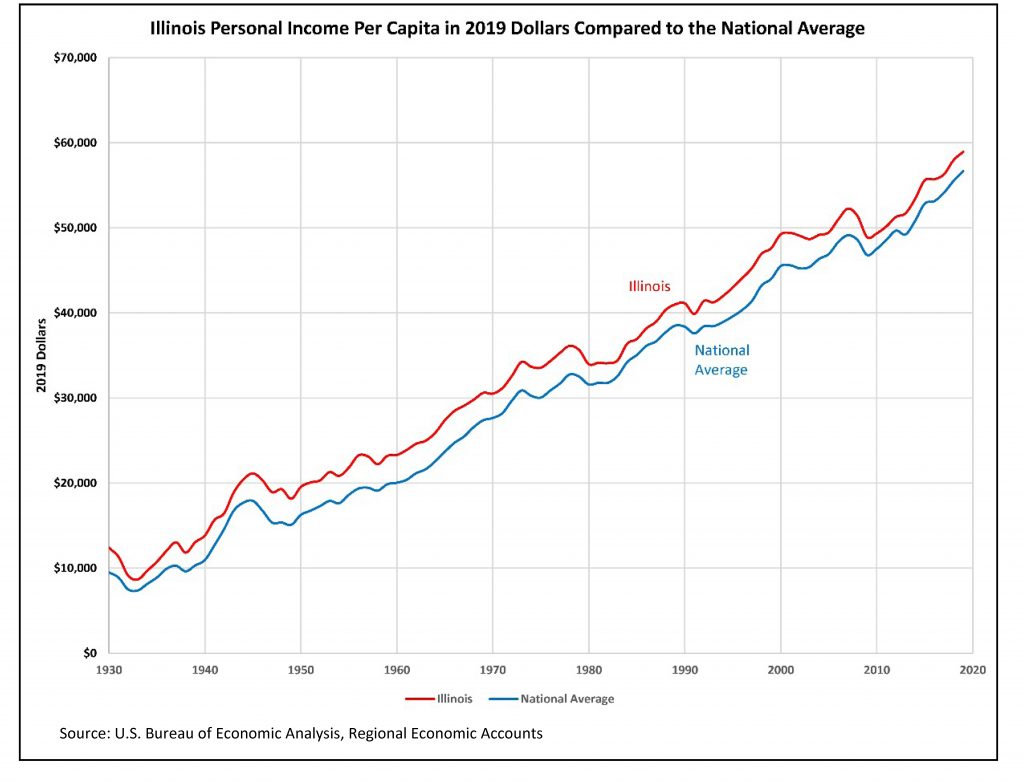 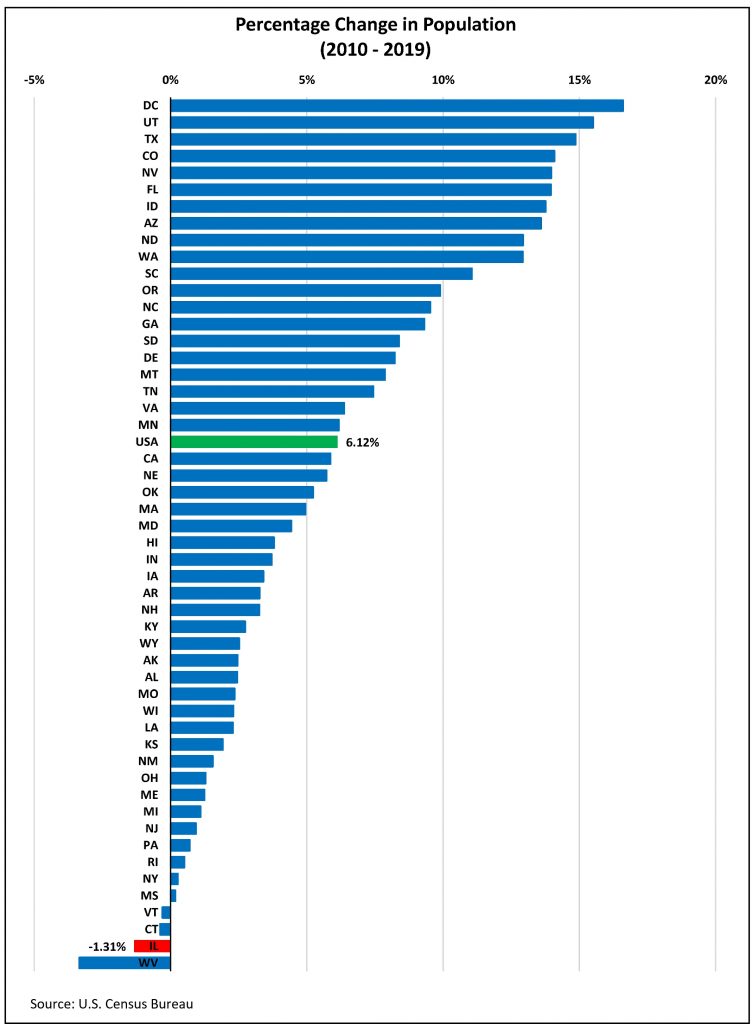 ILLINOIS PAYS AN ABOVE AVERAGE AMOUNT IN FEDERAL TAXES 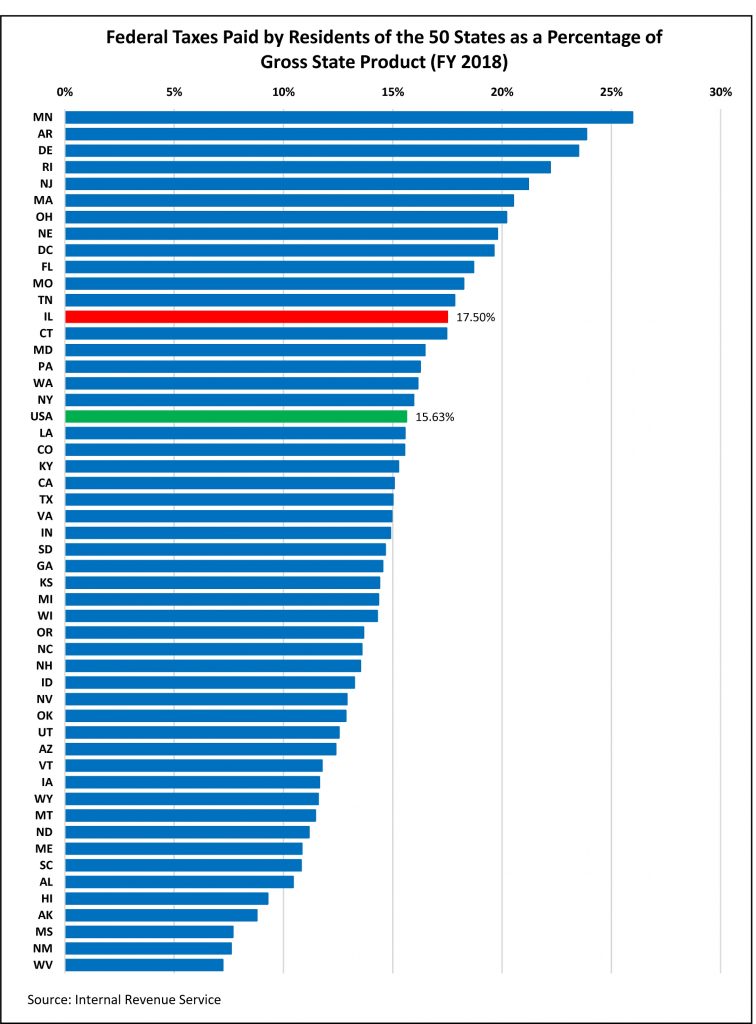 It is fairly well known that Illinois sends more money to the federal government in taxes that it receives back in benefits. There are two sides to this coin: how much Illinois sends to the Federal government and how much it receives. This chart shows how much Illinois residents pay in taxes to the I.R.S. Although Illinois is above the national average, we are not that much higher. However, in dollars, this 1.87% above average represents an additional $15.2 billion that Illinois sends to the Federal government than if we paid the average amount. These amounts include individual income taxes, business income taxes, FICA, estate taxes, excise taxes, and others. These amounts are also net of refunds. 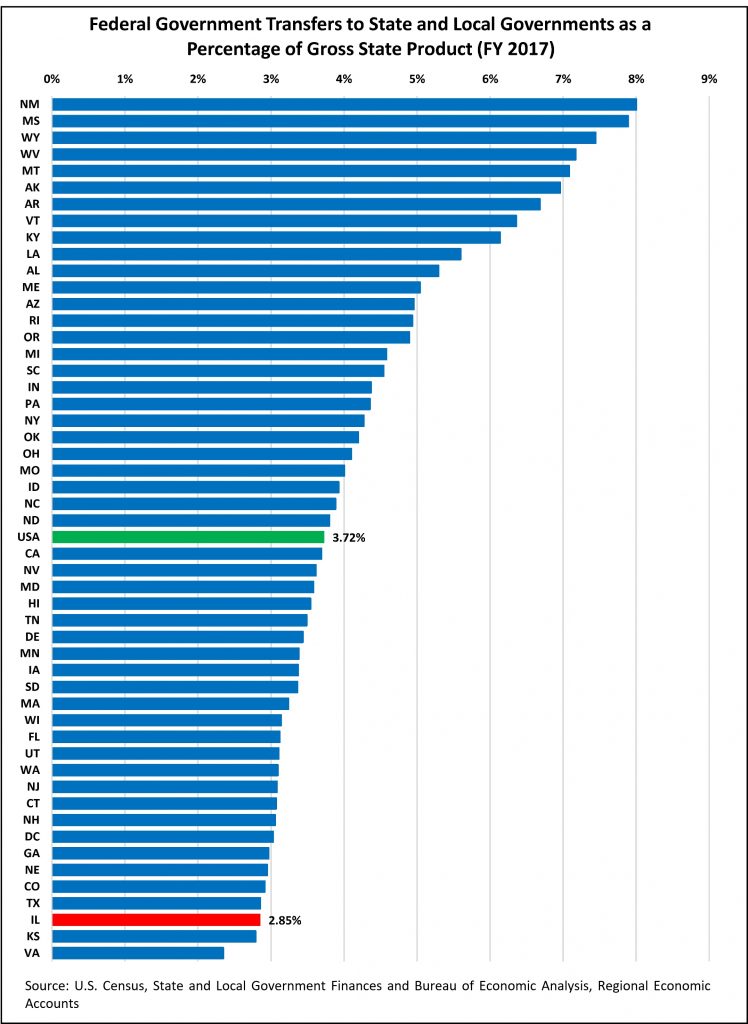 Illinois and its local governments receive fewer federal dollars as a percentage of the State’s overall economy than is the case in most states. This chart only includes transfers from the federal government to state and local governments such as highway and Medicaid funding. It does not include federal payments to residents such as social security or wages to federal employees. If Illinois received the national average, it would receive an additional $7.3 billion a year. 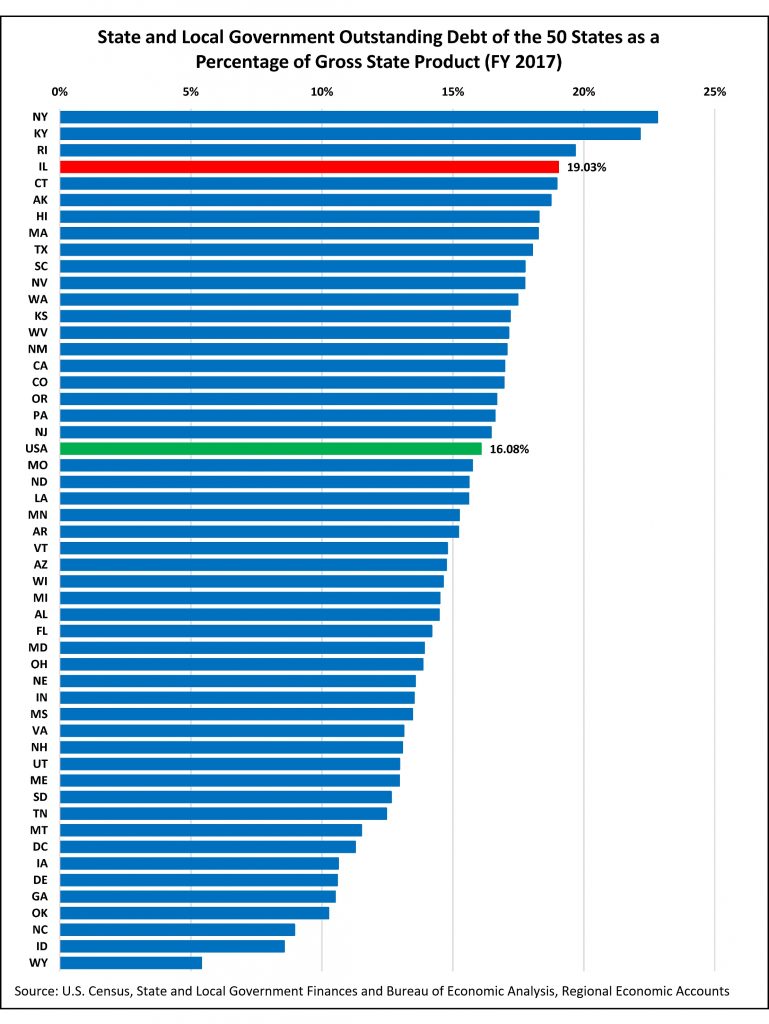 Illinois and its local governments have $155 billion of outstanding debt. This does not include unfunded pension liabilities. While this amount sounds high, and it is, it is only 18% above the national average (as a percentage of gross state product). On a per capita basis, the national average is $9,470 and in Illinois it is $12,103 per person.

ILLINOIS PENSION CONTRIBUTIONS ARE AMONG THE HIGHEST IN THE COUNTRY 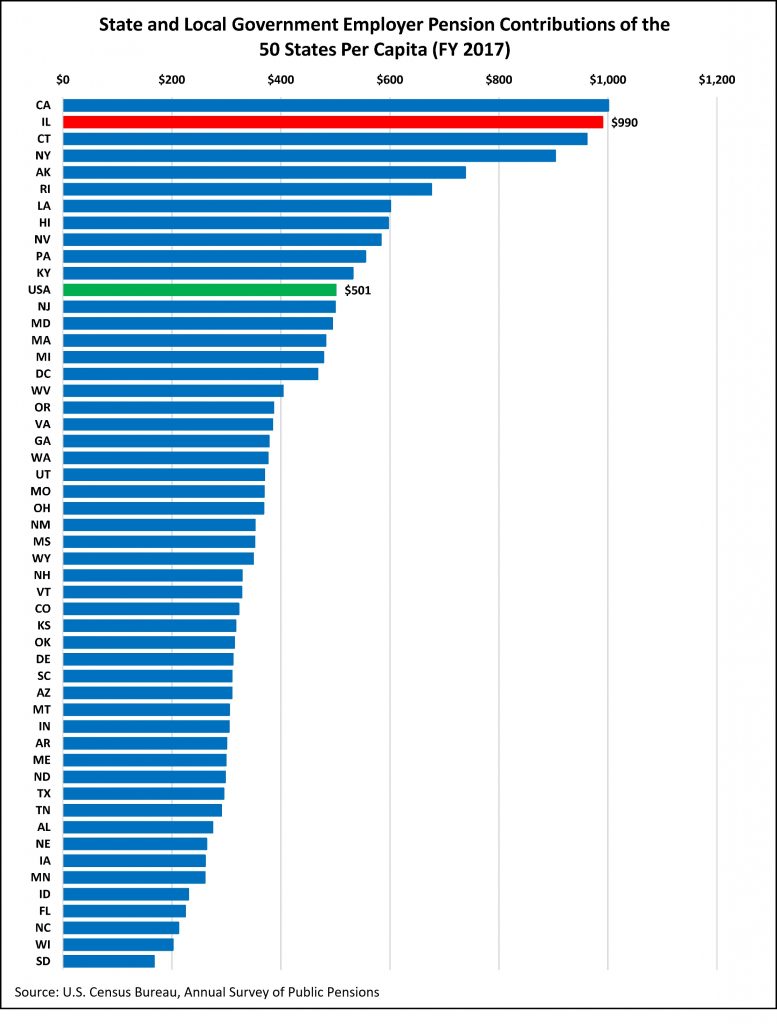 Illinois’ pension problems are well known. Each year state and local governments set aside money to pay for benefits earned in that year by current employees and additional money to pay for the unfunded liability from previous years. In total, Illinois and its local governments contributed $12.7 billion in FY 2017 to the pension systems in Illinois. On a per capita basis, Illinois contributed $990 for each citizen, while the national average is $501. If Illinois were at the national average, if would contribute $6.4 billion less each year.