People frequently ask how taxes in Illinois compare to other states.  The answer to that question depends on who you ask.  Advocates for increasing government spending present statistics that show Illinois as a low-tax state, while those who want a more limited role for government present statistics that show Illinois as a high-tax state.  Tax Facts:  An Illinois Chartbook, published last year by TFI, seeks to provide a true picture of where Illinois stands, and the following is an update of Chapter 2, a summary of Illinois’ overall tax landscape. In the coming months, we plan to update other chapters as well.

Two key points about how best to compare taxes between states:

One last note: Rankings make good headlines, but it is more useful to determine if a state is an outlier and if so, by how much. For example, if a state has the highest taxes in the country but is only slightly higher than the national average, then that #1 ranking means very little, because all the states have essentially the same tax burden. On the other hand, if a state is ranked 10th but it is significantly above average, the fact that nine states have higher taxes doesn’t provide much comfort to that state’s citizens.

ILLINOIS TAXES ARE ABOVE AVERAGE 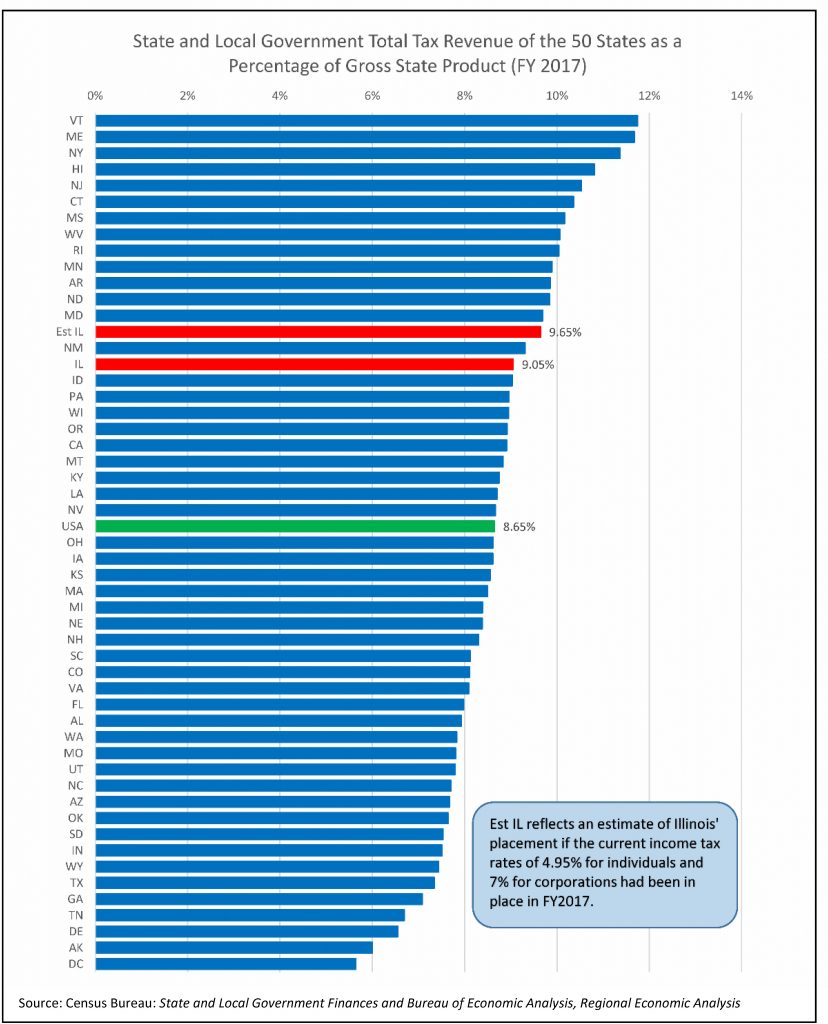 In FY2017, Illinois had the 15th highest total tax collections, at 9.05% of gross state product (Illinois collected $73.7 billion in state and local taxes). However, in FY2017, the individual income tax rate was 3.75%, while the current rate is 4.95%.  The corporate rate was 5.25% rather than the current 7%, or, after including the Personal Property Replacement Income Tax, 7.75% then and 9.5% now. Assuming the higher rates had been in place in FY2017, Illinois would have risen to 14th place (and would have collected an estimated $78.5 billion).

If the higher rates in effect today had been in place in FY2017, Illinois’ tax collections would have been 11.6% above the national average.

PER CAPITA TAXES IN ILLINOIS ARE HIGH 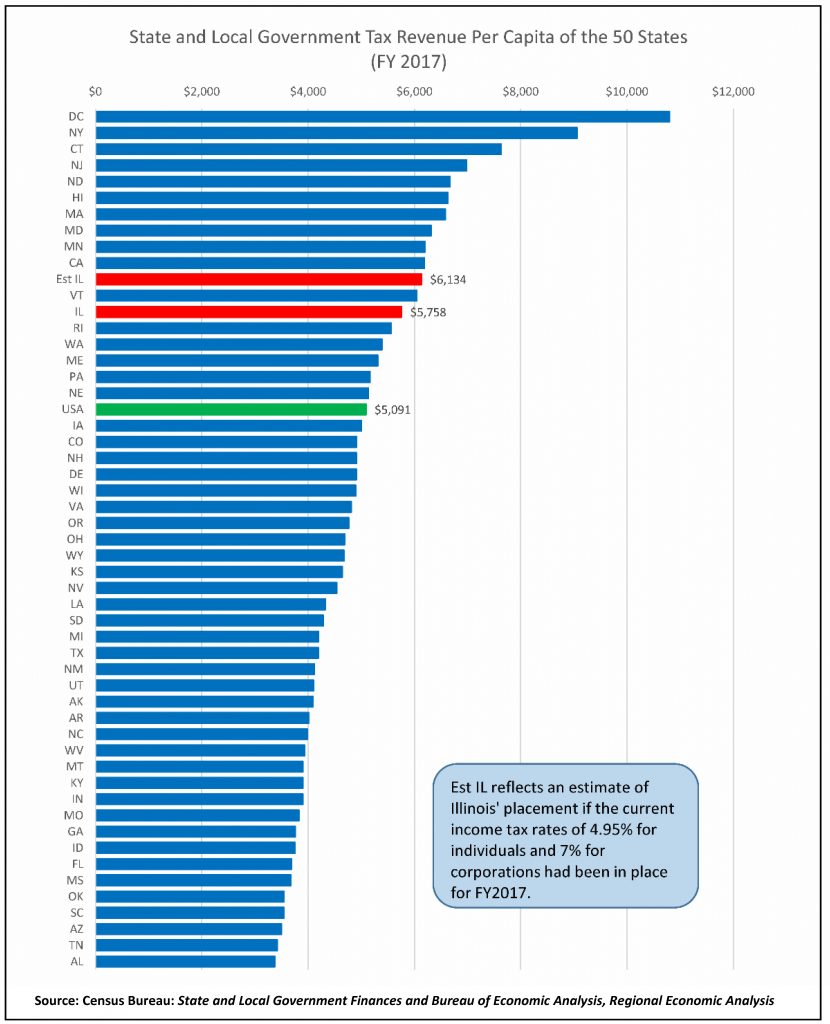 Per capita measurements fail to consider the different economies within the states, but they still have a purpose. When we say Illinois’ state and local taxes are at 9.05% of gross state product, most people don’t know what that means to them personally. Saying that Illinois’ state and local tax burden is $5,758 per person, on the other hand, is easier to understand (even though some people pay less than this and others pay more). The average per capita state and local tax collection is $5,091, but Illinois collected $5,758 per person in FY2017. If the income tax rates had been at their current levels, Illinois would have generated $6,134 per person, or 20.5% above the national average. 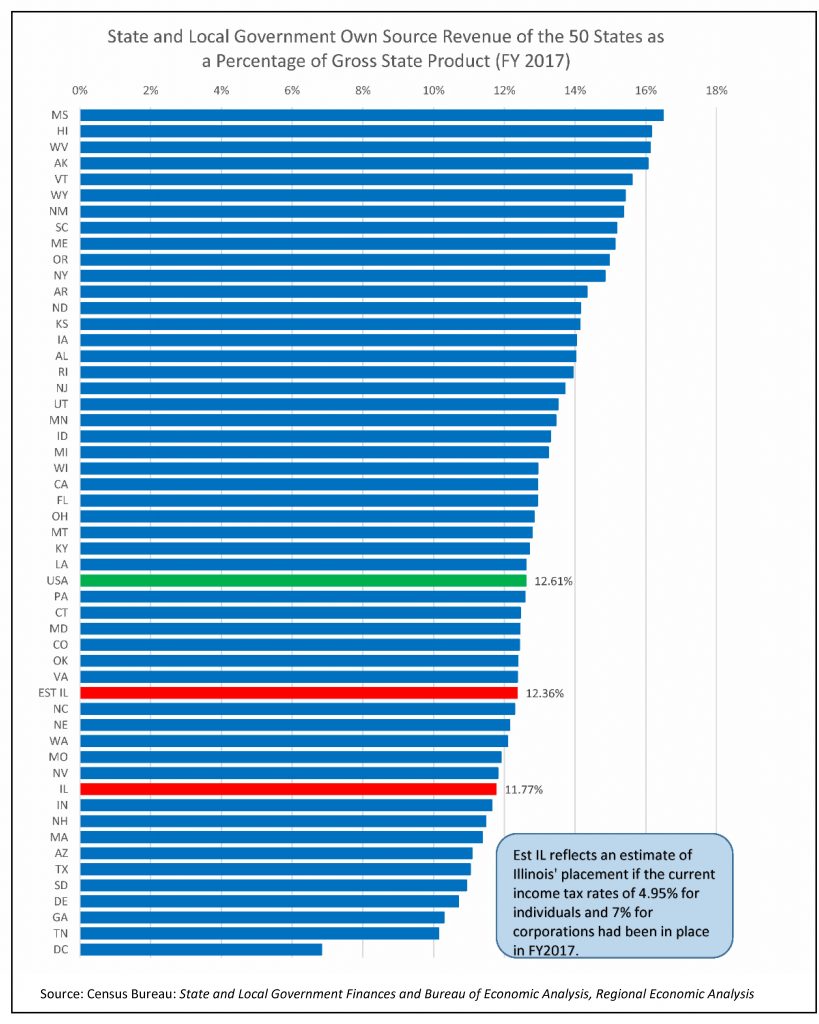 So far, we have looked at Illinois’ total tax collections, which includes income taxes, sales taxes, property taxes, excise taxes, utility taxes, and other miscellaneous taxes. It does not include other revenues that state and local governments receive, such as fines, fees, college tuition, tolls, and other similar revenues. One can argue that a more inclusive figure (commonly called own-source revenue) is a better measuring stick, since a person doesn’t care if a payment they make to a government is a fee or a tax–it is still going to the government. However, most fees are for a specified service (or should be), such as parents paying a sports fee for their child to play soccer in high school or a driver paying a toll to use a certain highway. And the revenues from these fees are generally used to fund that specific service (the soccer team or highway), rather than for general government purposes. Despite these misgivings, it is important to look at this more inclusive figure, which shows that Illinois is below the national average, even when the 2017 income tax increase is factored in.

While this own-source revenue number may be useful for some purposes, understanding it requires looking at what is driving the difference: where is Illinois significantly below average, and where are we significantly above average. 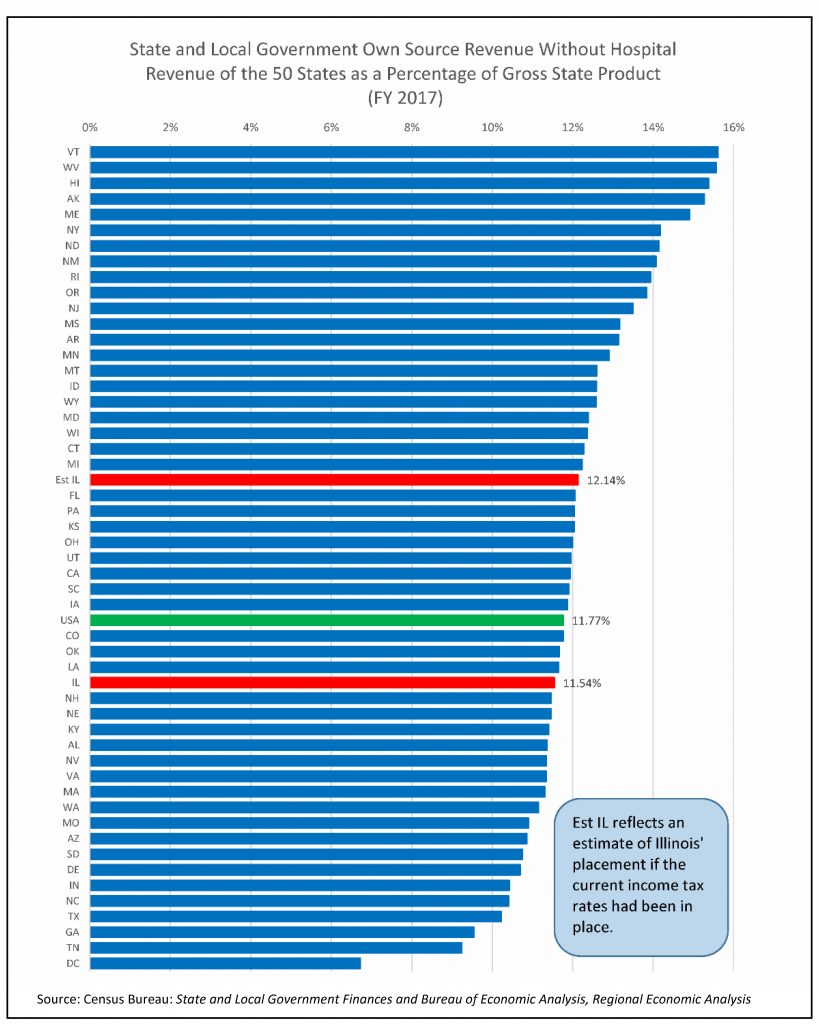 When government hospital revenue is removed from the own-source revenue data, Illinois’ ranking increases. In FY2017, Illinois was still below average, but after factoring in the estimated impact of the 2017 income tax rate increase, Illinois moves to above average, meaning Illinois is not much of an outlier.

UNTIL RECENTLY, ILLINOIS TAXES HAVE BEEN BELOW AVERAGE 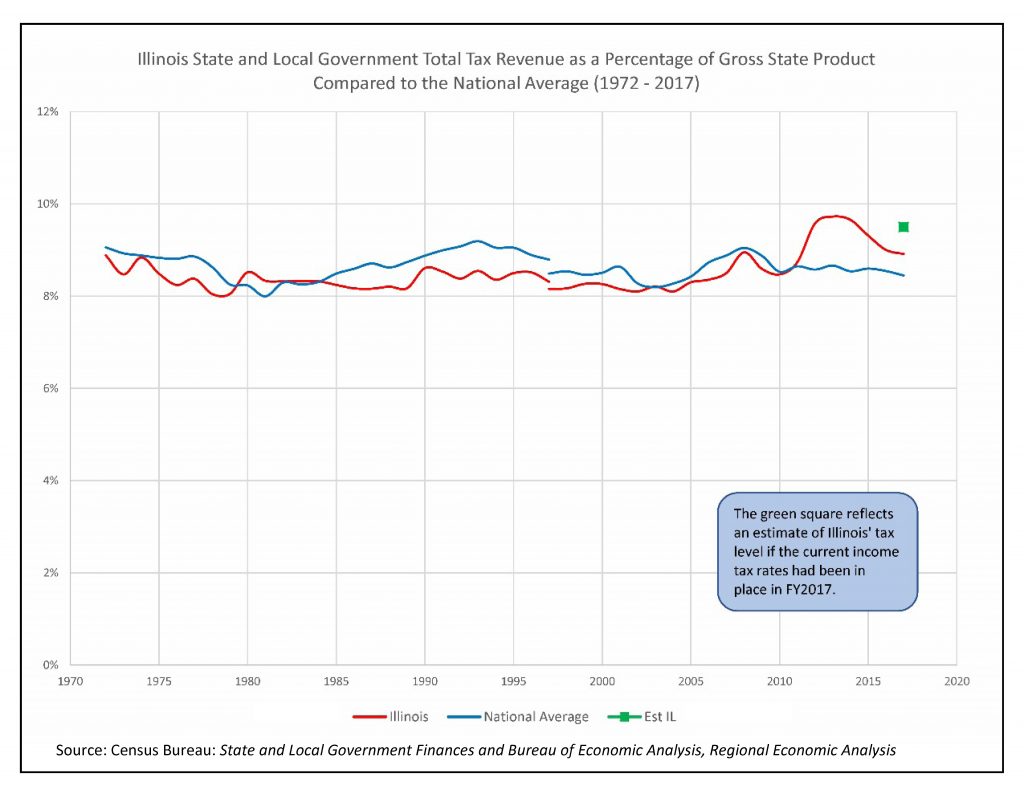