The Net Operating Loss (NOL) deduction is Illinois’ largest single corporate tax expenditure. For a detailed discussion of the state’s largest tax breaks—the top six of which are available only to individuals or charities—see “The Cost of Illinois’ Largest Tax Breaks”, April 2021 Tax Facts. The NOL deduction reduced the state’s tax revenues by $383 million, according to the Comptroller’s 2019 Tax Expenditure Report. This large amount, and the fact that it is the largest tax expenditure available to businesses, makes the NOL deduction a frequent target of those seeking to increase state revenues by “closing corporate loopholes” or “making businesses pay their fair share.”  NOLs are not loopholes, however, and are in place specifically so that businesses do pay their fair tax liability, neither less nor more.

What, exactly, is an NOL? Put simply, it’s a recognition that businesses have good years and bad ones.   Using a 12-month period to evaluate (and tax) a business’s operations is necessary, of course, but ignores the reality that it can take years for a new business to turn a profit, or for an entire industry to come out of a slump.  NOLs allow those profits and losses to offset each other.

This article provides examples of why NOL deductions are necessary from a tax policy perspective, explains the mechanics of Illinois’ NOL calculation and how it’s evolved over time, and compares Illinois’ treatment to that in other states.  We also examine the likely fiscal impact of the latest development, a temporary limitation on the NOL deduction, which will increase the state’s tax revenues now, but reduce them later.

Three Examples
In order to demonstrate why NOL deductions are a standard part of every income tax regime, we will take a quick look at three hypothetical businesses and their operations over a ten-year period:

In the long run, our three businesses are equally profitable—each of them netted $100,000 in income over the 10 years.  It should follow, then, that they pay the same amount of tax over that period. For simplicity’s sake we will assume the tax rate is 5%, so the total tax over the 10 years should be $5,000. Let’s take a look at what actually happens if losses aren’t carried over:

Each of the 3 business owners netted $100,000 over the 10-year period, yet as Table 1 shows, the total amount of tax paid is not the same.  Only Lucy pays the “correct” amount of $5,000.  Sally and Marcie end up paying tax rates of 20% and 15%, respectively—substantially more than the official 5% rate.  To address this inequity and make sure that all similarly situated businesses pay similar amounts of tax, the federal government and every state with an income tax have adopted a net operating loss deduction.  If losses incurred in one year can be used to offset income earned in a different year, we get a more equitable outcome: 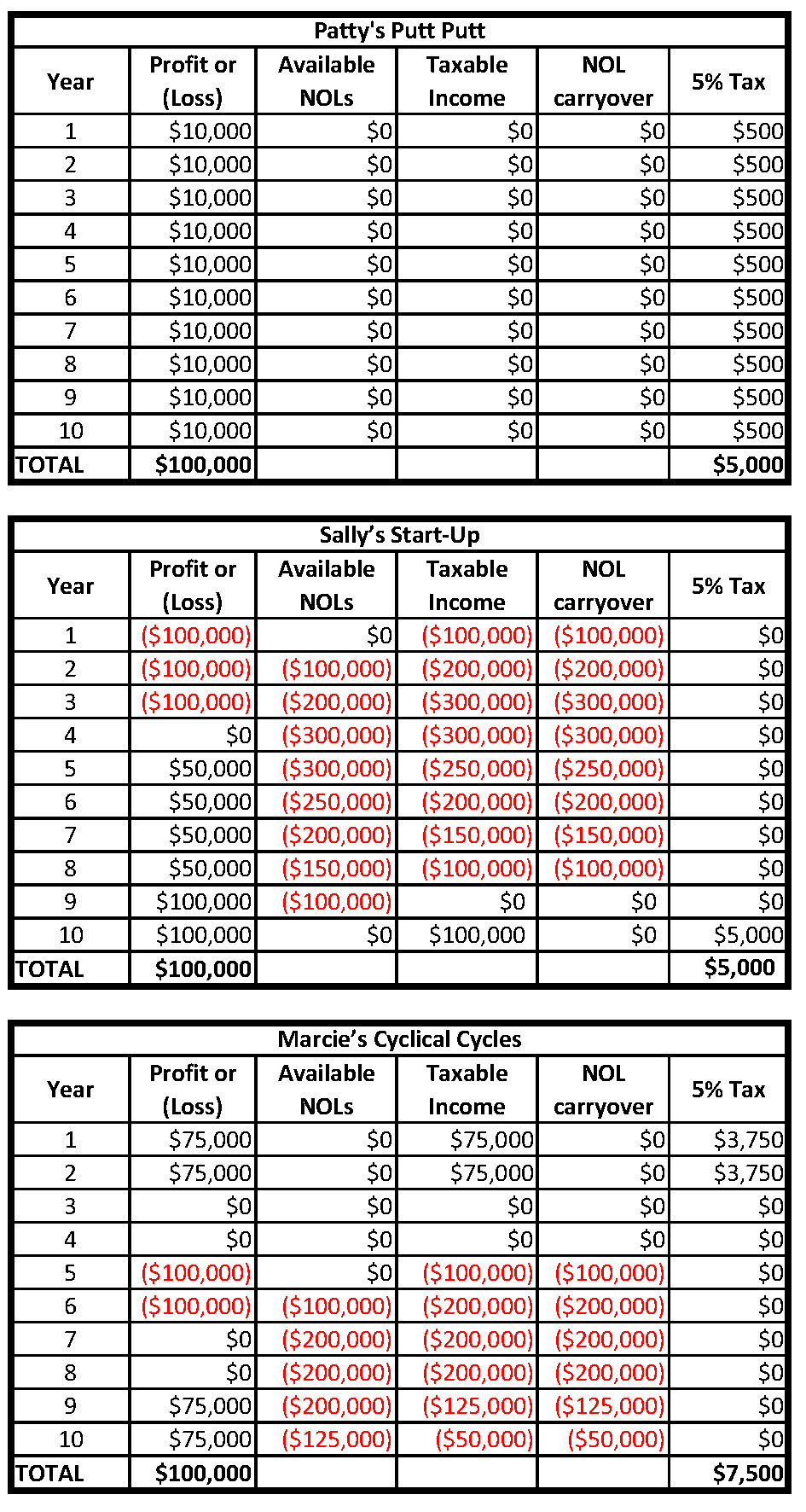 Patty’s situation is unchanged; she made money every year and paid tax every year, and there were no losses to carry over.  On the other hand, Sally’s $300,000 of start-up losses can now offset her gains as she works her way out of the hole.  As a result, when losses can be carried forward, Patty and Sally pay the same amount of tax on the same amount of income.  Marcie is still paying more tax, although the difference is less extreme and she has loss carryovers that will be available to offset future income.

In other words, the NOL carryover means the total taxes paid over time is more equitable.  Similarly situated taxpayers pay a similar amount of tax.  This is a hallmark of sound tax policy and is why every jurisdiction with a corporate income tax, the United States federal government, 44 states, and the District of Columbia, also has a net operating loss carryover.

The Mechanics of a Net Operating Loss
The basic calculation of an income tax is straightforward:  taxable income multiplied by the tax rate.  If a taxpayer’s income is zero, or a loss, then no tax is due. That loss amount—the NOL—can be carried forward, or sometimes back, to another tax year to reduce taxable income before the tax is calculated. If a loss is carried back, as allowed in some states and was permitted in Illinois until 2004, the taxpayer files an amended return and claims a refund of taxes already paid. The specifics of the carryover process can get complicated, and in Illinois have changed over the years, so a little more discussion is warranted.

Illinois, like most states, bases its taxable income on what was determined for federal income tax purposes.  We have our own net operating loss calculation, however, so federal NOL adjustments are ignored.  (Ironically, if we piggybacked on the federal NOL deduction, there would be no Illinois adjustment and no amount reported on the Comptroller’s Tax Expenditure Report. There would be other complications, but the concept would almost certainly attract less attention.)

The changing carryback and carryforward rules are confusing enough, but there are a number of additional wrinkles.  The years mentioned above are for calendar year taxpayers; businesses with other fiscal years can have some unexpected (and usually detrimental) additional hurdles.  The carryforward period has also been extended for taxpayers impacted by the temporary suspensions in 2011-2014 and 2021-2023, with the intent that the losses would eventually be deductible; just not as quickly as normal. The even more complicated interplay of the loss rules with apportionment and changing unitary business groups is beyond the scope of this article.

Impact of the NOL Deduction on Illinois’ Tax Revenues
Because the NOL deduction is a separate line item on the Illinois income tax return, the tax impact of that deduction is included in the Tax Expenditure Report published each year by the State’s Comptroller.  To ensure that reported data is complete, there is a time lag—corporate income tax returns for the 2017 calendar year are frequently filed in the fall of 2018, so the 2019 Tax Expenditure Report, released earlier this year, includes NOL deductions associated with the 2017 calendar year.

As shown in the chart below, over the past twenty years or so, the NOL deduction has resulted in reduced tax collections ranging from $0 to $642 million.  The chart also shows how corporate income tax collections have varied.  Both are impacted by the economy, tax rates, and the availability of the NOL deduction itself.  For example, NOLs could not be deducted at all on tax returns for calendar year 2011, resulting in $0 NOLs claimed and  higher tax collections. Conversely, the NOLs suspended in 2011 – 2013 could be deducted again in 2014, resulting in a spike in NOL deductions. The revenue consequences of Illinois’ corporate tax rate changes, from 4.8% to 7% in January of 2011, to 5.25% in January of 2015, and to 7% in July of 2017, impact both tax collections and the tax consequences of a deducted NOL as well.

Illinois has once again limited the use of net operating losses to $100,000 a year, for calendar years 2021 through 2023, and any suspended losses may be deducted beginning in 2024.  Once data for these years is available, we are likely to see a repeat of the fiscal consequences from a decade earlier: a drop in NOL claims and spike in tax collections at first, and then the reverse.  In other words, the temporary suspension of the net operating loss deduction will likely be a mere timing shift in tax revenues from one year to another, helping shore up budgets in the short-term while adding to the holes in future years.

What Do Other States Do?
As with many things in the state tax world, there is no uniform NOL treatment among the states.  The 44 states (plus the District of Columbia) with a corporate income tax all have an NOL deduction, and 17 follow the federal carryover rules.  The federal government currently does not allow losses to be carried back, but allows NOL carryforwards with no time limitation.  This avoids any unfair results for businesses in industries with long up-and-down cycles, and is likely to be particularly helpful for those hard-hit by the pandemic.

Of the states that do not follow the federal treatment and instead limit NOL carryover years, Illinois is one of the most restrictive, as shown in Table 3, even without taking into consideration the current temporary $100,000 per year limitation.

Conclusion
It is absolutely imperative for state policymakers to periodically evaluate the purpose, effectiveness, and impact of the state’s various tax provisions.  Illinois’ net operating loss deduction is a significant tax expenditure, so warrants occasional examination.  Rather than a “loophole” or corporate tax giveaway, it is a critical part of the state’s efforts to ensure its income tax applies fairly to all taxpayers, from start-ups to businesses in cyclical industries to putt-putt courses.  If anything, Illinois is an outlier and could do more to increase fairness by adopting carryover periods more in line with those in place elsewhere.

*Carol Portman has been the President of the Taxpayers’ Federation of Illinois since 2013.