When looking for additional revenue, lawmakers often suggest that they plan to close “tax loopholes.” And this makes sense as the concept of closing tax loopholes polls well with voters, probably because people do not think they benefit from tax loopholes. Therefore, closing loopholes will raise taxes on other people, which follows a common tax phrase, “don’t tax you, don’t tax me, tax that fellow behind the tree.” And the term “loophole” itself, is vague. People can put their own views into what a tax loophole is, similar to “tax reform.” “Loopholes” are generally bad and “reform” is generally good, but beyond that there is little agreement to what the terms mean.  The Illinois Comptroller issues a report each year titled the “Tax Expenditure Report.” The report for FY2019 identifies $10.18 billion in tax expenditures, so the report seems like an ideal place to find these tax loopholes that can be closed.  As this article indicates, however, the beneficiaries of these loopholes are not necessarily the proverbial fellows behind the tree, and many expenditures are in place for sound policy reasons.

Illinois law, which requires the Comptroller’s report, defines a tax expenditure as “any tax incentive authorized by law that by exemption, exclusion, deduction, allowance, credit, preferential tax rate, abatement, or other device reduces the amount of tax revenues that would otherwise accrue to the State.” This definition is important. In Illinois, the sales tax is a tax on the retail sale of tangible personal property. By definition the sales tax does not apply to services, meaning there isn’t a specific exemption. Because of this, the tax expenditure report does not mention or have an amount for the sales tax not applying to services, even though we commonly say services are “exempt” from sales tax. Conversely, there is an amount for items such as farm machinery and equipment since there is a specific sales tax exemption for these products. The table below lists the top tax expenditures from the report. 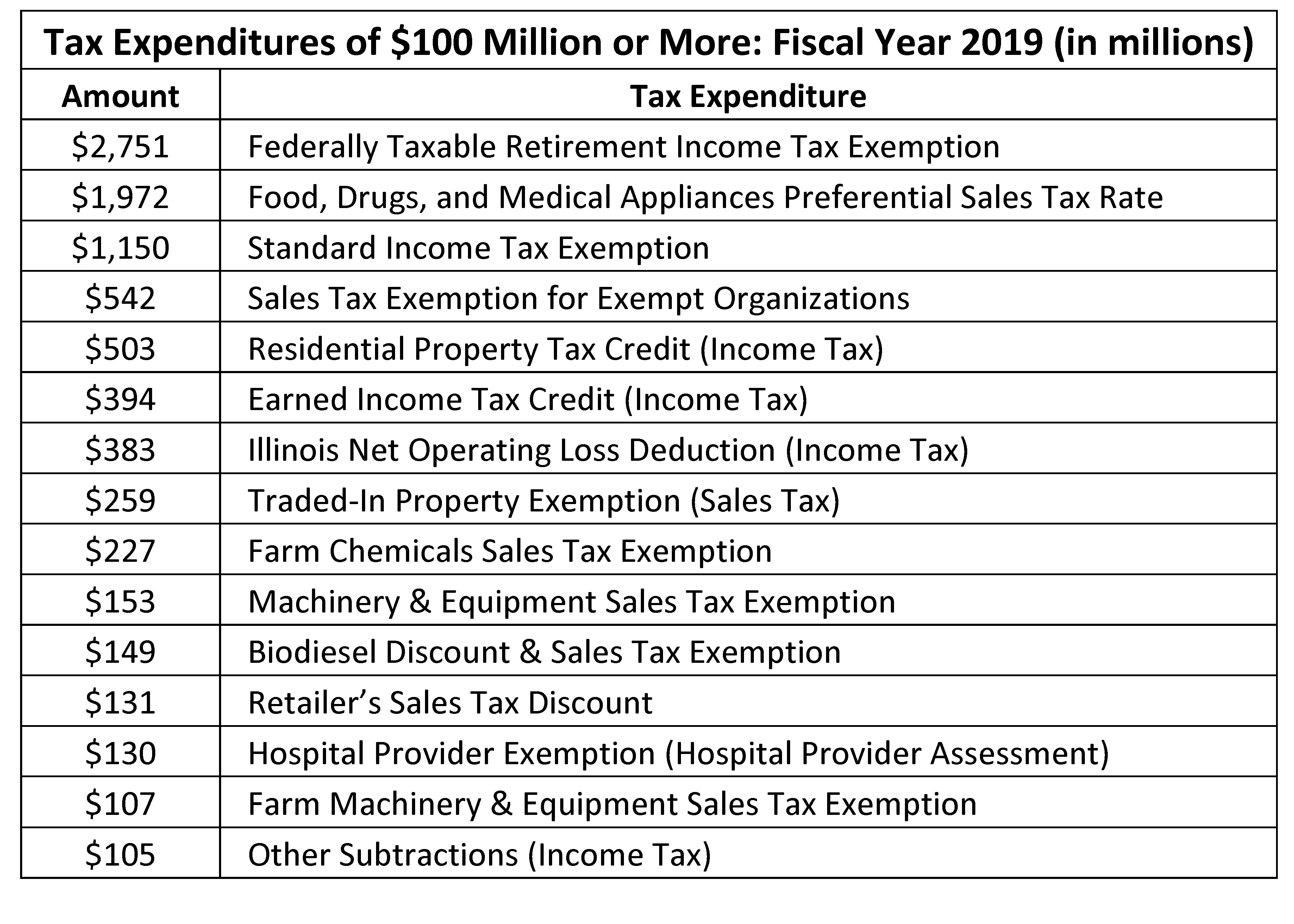 Of the $10.18 billion of tax expenditures identified by the Comptroller, $6.77 billion are commonly known exemptions, and not the sort of thing that would commonly be considered “loopholes.” In total, 68.5% of the expenditures directly benefit individuals. We discuss each of these provisions in more detail below.

Income Tax Expenditures
Illinois’ costliest tax expenditure is exempting retirement income from the income tax, which costs $2.75 billion a year in foregone tax revenue. Taxing retirement income in Illinois is somewhat of a political third rail. While think tank type groups often support adjusting this exemption so it only applies to low- or middle-income individuals, it is hard to find a lawmaker that publicly supports curtailing this “loophole.” Illinois is one of three states that exempts all retirement income. Most states, like the federal government, tax at least some retirement income.

There are three additional individual income tax expenditures. The first is the standard deduction which is available to most people in Illinois. In 2019, the exemption was $2,275 per person meaning the first $2,275 in income was exempt from tax, with additional amounts for seniors or those with children. This exemption cost $1.15 billion in 2019. There is also a tax credit equal to 5% of what the person paid in property taxes on their home. This credit costs $542 million a year. Starting in 2017, these two provisions only applied to those earning less than $500,000 for married taxpayers and $250,000 for single taxpayers. The last of the individual income tax provisions is the earned income tax credit, which costs $394 million. This credit is refundable and goes to working families, primarily those with children.

The largest corporate income tax expenditure is for net operating losses. This provision allows a corporation that had lost money in a previous year, to offset income in the current year with the previous loss. In other words, if a business loses $1 million in its first year as a business, but then earns $3 million in its second year, it would pay income tax on $2 million of net income. Most businesses when they first start off lose money. Often it can take years to turn a profit. When determining income, a calendar year is arbitrary. It is a useful reporting period for taxes, but it only looks at a small portion of time (relative to the life of most businesses). While this provision may fit the definition of a tax expenditure, it is not an “incentive” since this provision does not incentivize a business to lose money. It is a provision to get to the proper amount of income earned by the business. This provision cost the state $383 million in 2019, but the cost associated with this provision varies significantly from one year to the next.

Sales Tax Expenditures
Illinois taxes food, drugs, and medical appliances at a lower sales tax rate than general merchandise. This costs the State $1.97 billion. The overall cost of this exemption increases when including local sales tax rates, although the Comptroller’s report is limited to the state revenue impact of sales tax exemptions. Recently, legislators have been introducing bills to have more items taxed at this preferential rate, such as diapers, meaning the cost of this exemption is likely to increase.

Several sales tax exemptions on the report’s list exempt business inputs. These help prevent what’s known as tax pyramiding, which is paying a tax on a tax. With sales taxes, the final purchase of the product should be taxed, and the various inputs and stages of the manufacturing process should not. In a properly designed system, only the final transaction to the consumer is taxed. If there is a tax on the various stages, the taxes paid are passed along through higher prices, and the final tax is higher as it is based on the final sales price, which includes earlier taxes paid–a tax on a tax. These exemptions include the exemption for manufacturing machinery and equipment and for farm machinery and chemicals. These exemptions cost $487 million.

There is a sales tax credit for property that is traded in when purchasing new property. It is most common when trading in a used car for a new one. If a person is purchasing a car for $20,000 and trades in a car worth $5,000, sales tax is due on only $15,000 of the purchase price. This credit was modified in 2019 so that the maximum credit is now $10,000 for a motor vehicle. In FY 2019, this credit cost $215 million, but this will decrease starting in FY 2020 due to the change in law.

The final expenditure listed in this report is the retailers’ discount. Retailers that collect and remit sales tax retain 1.75% of the sales tax remitted. This amount is meant to partially reimburse the retailer for the costs associated with collecting the tax. It is important to remember with sales tax, retailers are acting as agents of the state. If given the choice, retailers would prefer not to collect sales tax and forego these funds.

Other Tax Expenditures
There is an exemption from the state’s hospital provider assessment for hospitals owned by state agencies, universities, or local governments. While this costs $130 million in state revenue, repealing this exemption would not generate any new overall government revenue but only shift taxes between governments.

Summary
When the term tax “loophole” is discussed, people generally define it as a tax benefit that another person or special interest receives, and frequently imagine a well-connected business taking advantage of a provision not widely available. Despite the rhetoric, businesses receive a small amount of the tax expenditures in Illinois law. In fact, as the Comptroller’s report shows, the majority of the state tax revenue lost due to tax expenditures benefit individuals through provisions that allow them to enjoy the benefits without necessarily even being aware of it.