In the Spring of 2010, the General Assembly passed P.A. 96-0889 which has become known as “Tier II.” It created a new lower level of pension benefits for future employees of the state and local governments in Illinois, excluding local police and firefighters.1 The General Assembly created this lower level of pension benefits in an effort to lower the State’s pension payments. These lower pension benefits applied to employees that started working for the government on or after January 1, 2011. Now that more than ten years have passed since Tier II went into effect, we thought it was a good time to look at the data (from the pension systems actuarial valuations and the annual reports published by COGFA) and see what Tier II has accomplished, and what it hasn’t.

Tier I vs Tier II
There is no doubt that Tier II benefits are inferior to Tier I benefits. The major differences are as follows:

Every change listed here either (i) causes an annuity to be lower, (ii) delays when an employee can start receiving their annuity, or (iii) reduces increases to the annuity after retirement. The General Assembly also created “Tier III” benefits for the major state pension systems, but the systems have not implemented the new plan. Tier III has a smaller defined benefit than Tier II but it also includes a defined contribution portion.

Status of the Pension Systems
A lot has happened since Tier II was created in 2010. In 2013, the State passed SB1 (P.A. 98-0599) which reduced pension benefits for current employees and retirees; the bill was ultimately ruled unconstitutional by the Illinois Supreme Court and did not go into effect.2 The assumed rates of return of the pension systems’ investments have been reduced from a range of 7% – 8.5% to a range of 6.5% – 7%. The State has enacted optional pension buyouts for retirees. Last but not least, the pension systems have changed their actuarial assumptions. All of these changes have had an impact on the finances of the pension systems. And it goes without saying that the economy has a direct effect on investment returns of the pension systems.

Below are a series of charts that show various measures of the State’s five pension systems (TRS, SURS, SERS, JRS, & GARS). Each chart has three lines: a red line which shows the projections for the pension systems as of 2009 (prior to the passage of Tier II); a yellow line which shows the projections as of 2010, (immediately after passage of Tier II); and then a green line which represents what actually happened and the most current projections. 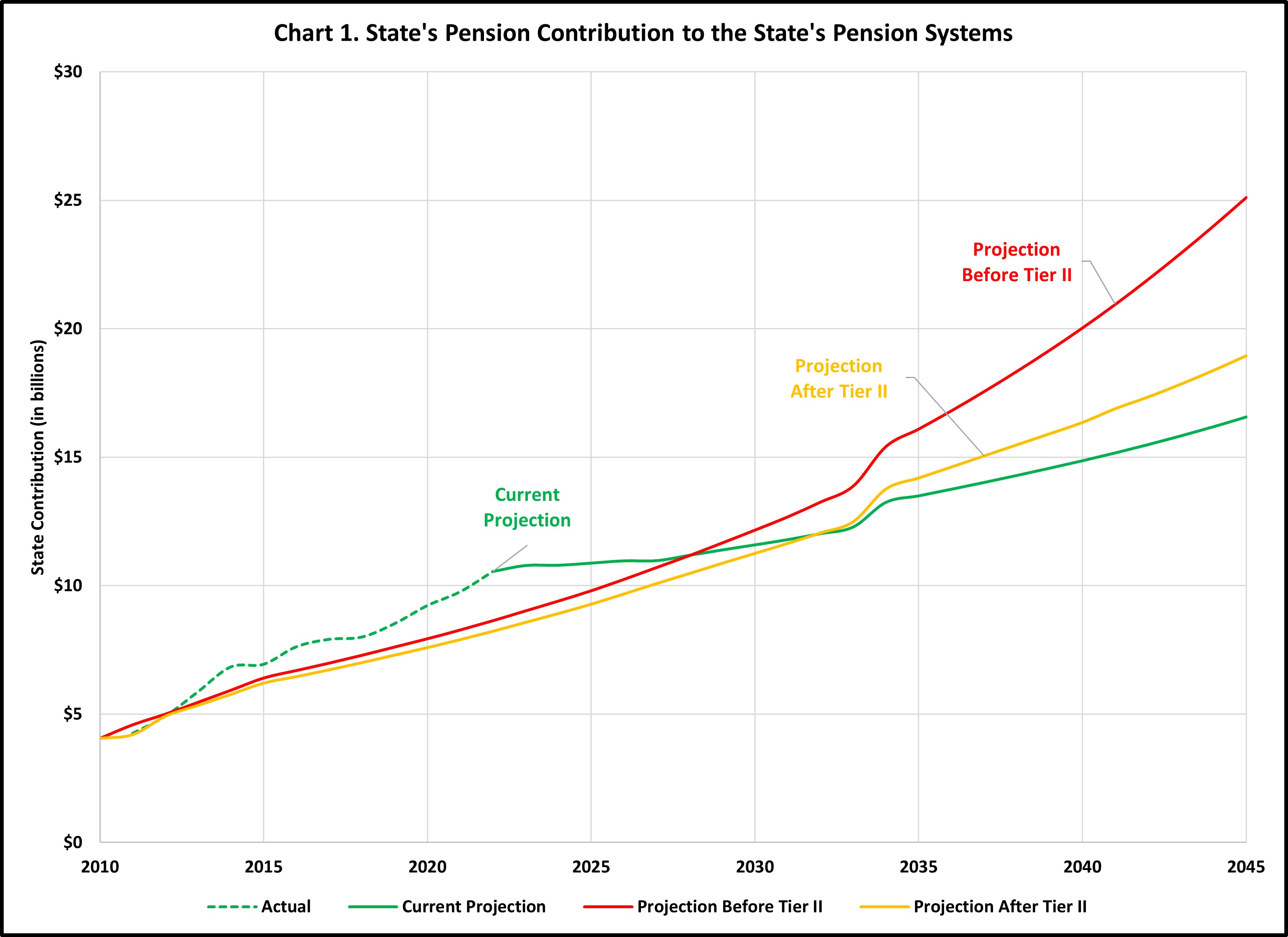 If the State hadn’t passed Tier II, the current pension payments would be even higher than they currently are, as changes to the systems which have increased the total pension liability would have still happened. The pension system’s assumed rate of return would have still been reduced, and the reduction of these rates caused the State’s contributions to increase. The investment returns (and sometimes losses) would have been essentially the same. Actuarial assumptions would have still changed (including changes to the mortality table which reflects people living longer and receiving their pensions for a longer period of time). Even with these changes, the chart shows that in just a few years the State’s contributions are projected to be lower than they would have been without Tier II. 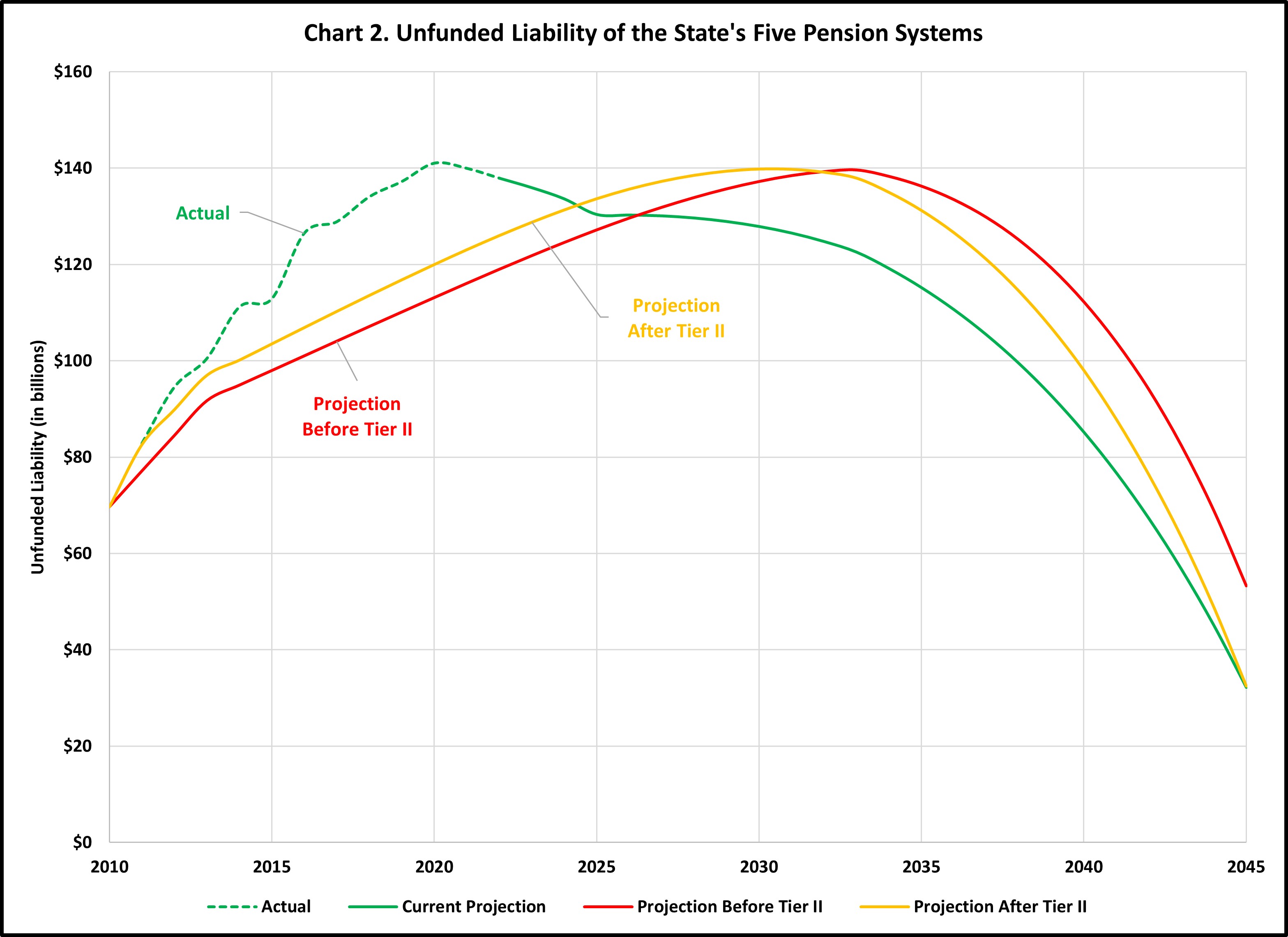 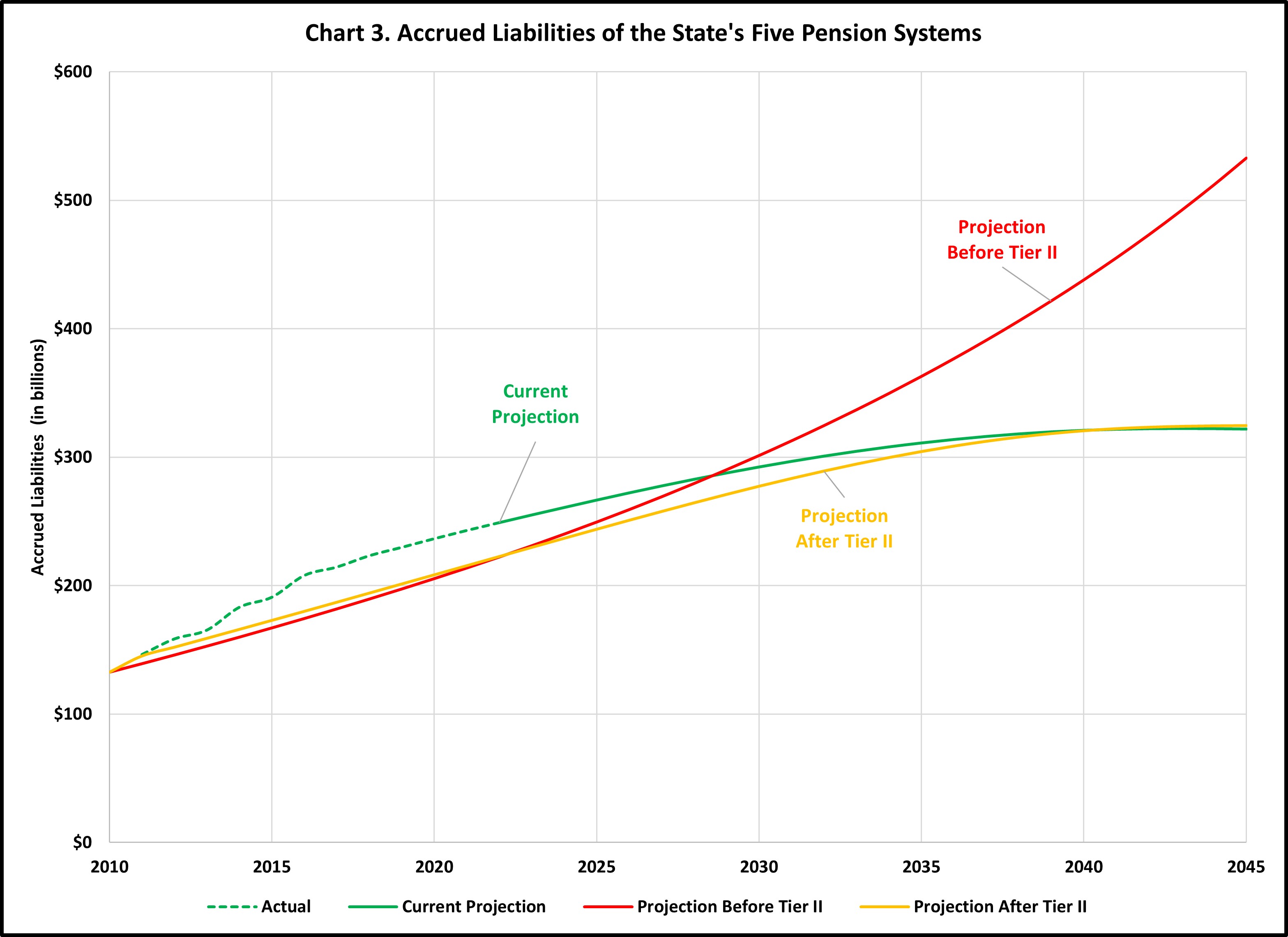 Chart 4 shows that the vast majority, 99% to be precise, of the benefits earned by members of the State’s pension systems have been earned by Tier I employees or inactive members which are predominantly Tier I retirees. Of the $243 billion of benefits earned, only $2.5 billion have been earned by active Tier II members. This shows that the increase in liabilities for the pension systems been almost exclusively driven by Tier I pensions and not Tier II pensions. 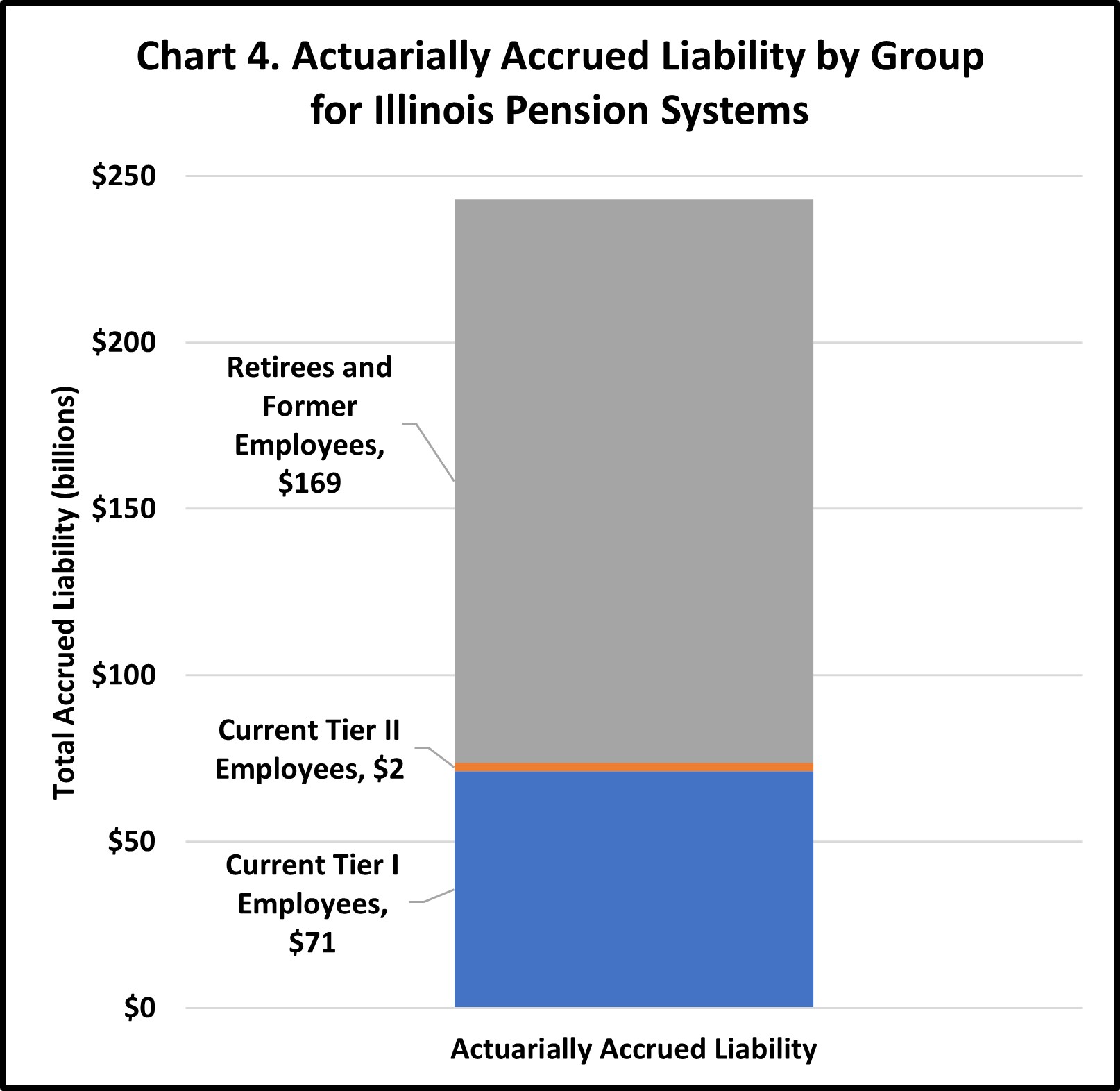 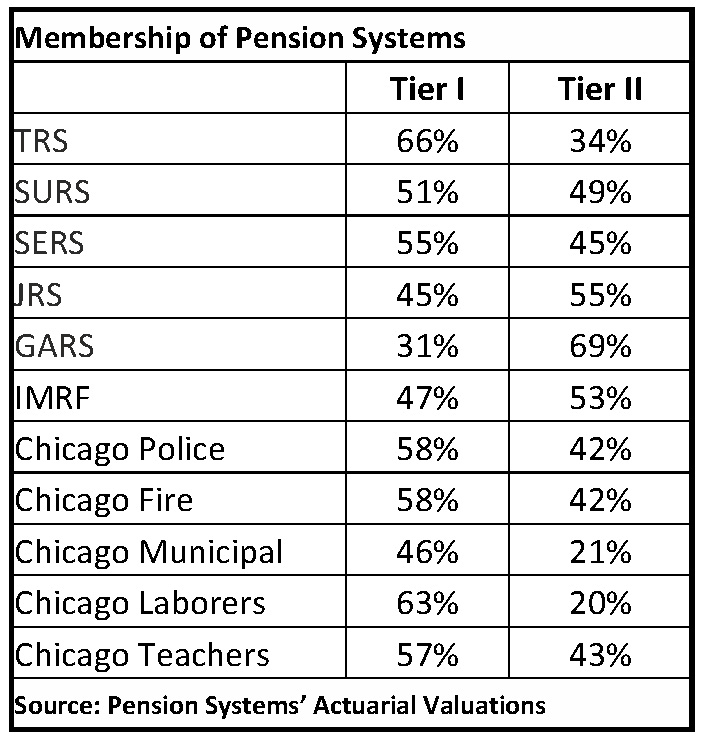 The total pension liability today is higher than it was anticipated to be prior to the passage of Tier II, which on its face seems to show that Tier II has not accomplished its goal of addressing the state’s pension woes. However, this increase was primarily caused by the pension systems lowering the assumed rates of return, which increased the estimated cost of all pensions, and not just Tier II. Tier II benefits are inferior to Tier I benefits, but Tier I benefits still account for 99% of the total liability. As more Tier I employees leave state employment and are replaced by Tier II employees, the cost of benefits earned by the new Tier II employees will be lower than their Tier I predecessors, further helping the State get to its funding target of 90% by 2045.

What remains to be seen, of course, is if the State makes additional changes, and what impact they would have on these calculations. There have been proposals to “refinance” the unfunded liability by extending the funding target to a later year. The General Assembly could decide to increase Tier II benefits, which would increase the total liability. But if Illinois stays on the current path, and the pension systems meet their assumptions, in 2046, the State will see its annual pension payment drop by approximately 80%, or from $17 billion to merely $3 billion. Then the State will have the difficult decision of what to do with the “extra” $14 billion…

Footnotes:
1Pension benefits for future police officers and firefighters were reduced later that year by P.A. 96-1495
2In re Pension Reform Litigation, 32 N.E.3d 1