We have been trying to answer the question of why Chicago’s per capita sales tax collections (and accordingly its per capita retail sales) are below the statewide average, given the city’s significant tourism, entertainment, and business activities.  In the August issue of Tax Facts we looked at per capita retail sales in Chicago, Suburban Cook County, and Illinois statewide, by category of retailer.  The starkest difference was in automobile and gasoline sales, but Chicago trailed suburban and statewide averages in nearly all categories.

Next, we turn to differences within Chicago, using the Illinois Department of Revenue’s sales tax collections by ZIP code. As the discussion below indicates, much of the data is consistent with our expectations (high volumes in the Loop, for example), and helps fill in the blanks when trying to understand why Chicago’s sales per capita lags the statewide average.

What Sales, When, and Where?
For our comparisons, we look at the 1 percent Municipal Sales Tax (part of the state’s 6.25 percent sales tax) imposed on all taxable sales, including drugs and groceries, administered by the Department of Revenue and returned to local governments based on the point of sale.  We added neighborhoods (community areas from the Northeastern Illinois Planning Commission) to help readers who have not memorized all Chicago ZIP codes.  We use 2019 data because that was the latest year available from the Census Bureau when we first began examining Chicago’s low collections.  It has the added advantage of being before COVID-19 turned retail on its ear.

It’s worth noting that this data tells us where the retailer is located, not the buyer.  The sale to a Chicagoan living near the Indiana border who treks to Cartier on Michigan Avenue to buy a luxury watch will be credited to 60611 (Navy Pier and the Magnificent Mile).  Similarly, if that person drives to Indiana to buy a pair of jeans, the sale will not appear in the data.

High Per Capita Sales Downtown
Within the City, retail sales per capita vary widely, from $491,414 per person in ZIP code 60603 (Loop between Madison and Jackson) to $2,195 in 60633 (Hegewisch on the Indiana border).  The ZIP codes with the 10 highest and lowest per capita retail sales are shown in Charts 1A and 1B.  All of the top 10 per capita ZIP codes are downtown, in or near the Loop, with an average per capita retail sales of $138,313, significantly above the statewide average of $15,000 per capita. The farthest away of the 10 was the Near West Side. 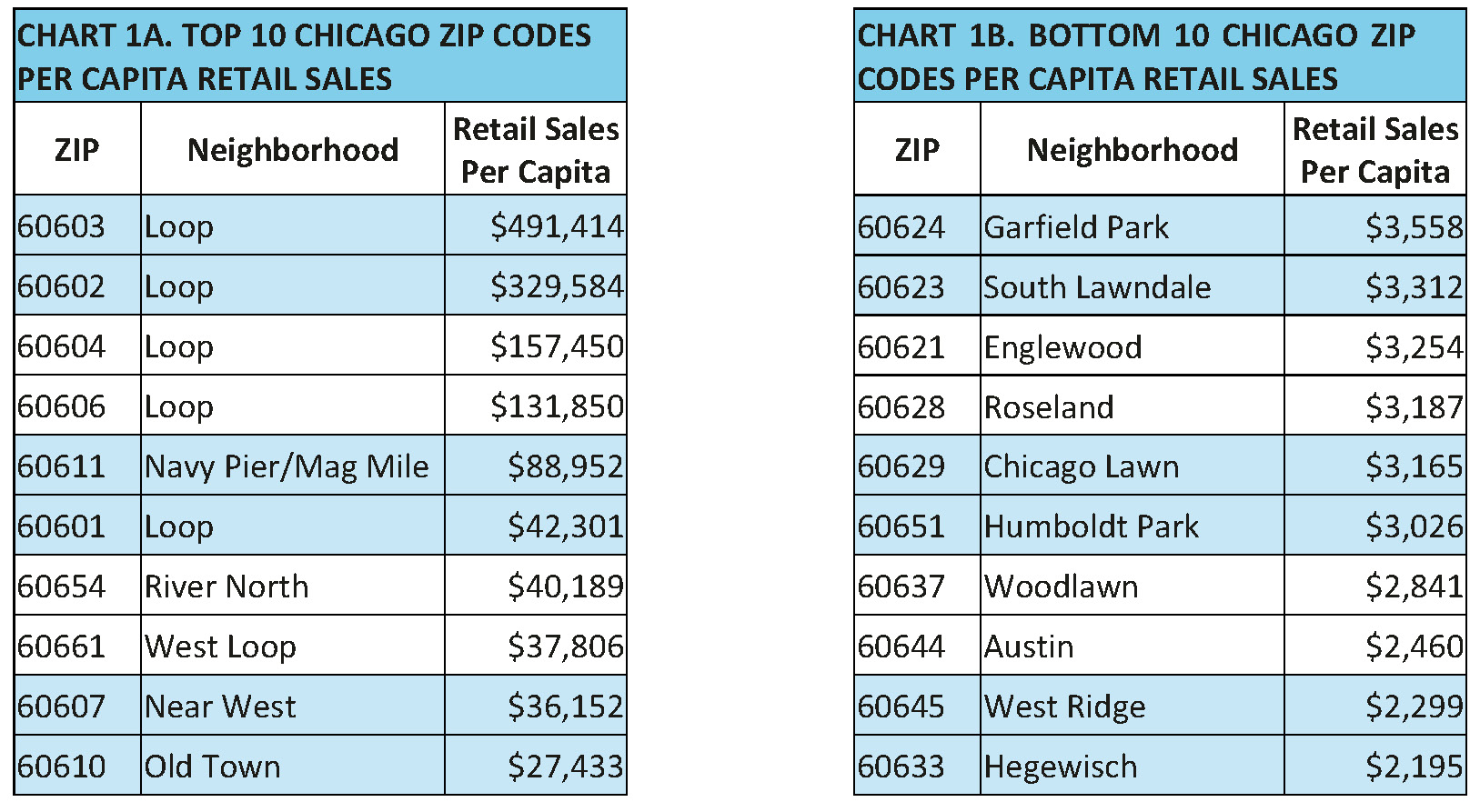 The results confirm our assumption that downtown businesses (this was before COVID) and tourism would drive up Chicago sales tax collections.  We also have this data broken down by category of retailers, which we examined on a citywide level in the last issue of Tax Facts. In the Top 10 per capita ZIP codes, bars and restaurants accounted for 43 percent of all sales tax collections; citywide bars and restaurants accounted for 28 percent.

Turning to the 10 ZIP codes with the lowest per capita collections, the differences are stark.  The average retail sales per capita is $2,930 (remember, this includes groceries and medicine), roughly 2 percent of the average for the 10 highest ZIP codes and well below the statewide average of $15,000.  The lowest ZIP codes are primarily on the city’s south and west sides, where the limited retail presence has been a frequent topic of discussion in recent years.

High Total Retail Sales Elsewhere
The ZIP code with the highest total retail sales is 60611, which includes Navy Pier and the Magnificent Mile, followed by Lincoln Park, Old Town, Logan Square and Lakeview.  All have significantly more residents than do the Loop ZIP codes and are also destinations for shopping, eating, and drinking.  All told, the top 10 ZIP codes account for 41 percent of Chicago’s retail sales; those same ZIP codes represent 21 percent of the city’s population.  Interestingly, despite the high total sales, three of these top 10 ZIP codes, in Logan Square, Belmont Cragin, and Irving Park, were still below the $15,000 statewide per capita average.  See Chart 2A.

On the other end of the spectrum, the lowest 10 ZIP codes in terms of total retail sales account for 7 percent of total tax collections, despite being home to 11 percent of Chicago’s population. Not surprisingly, 9 of the 10 are below the statewide per capita average as well. The exception is Loop ZIP code 60604, which had a population of less than 1,000, so even though it had among the lowest total retail sales, it had the third highest per capita collections. See Chart 2B. 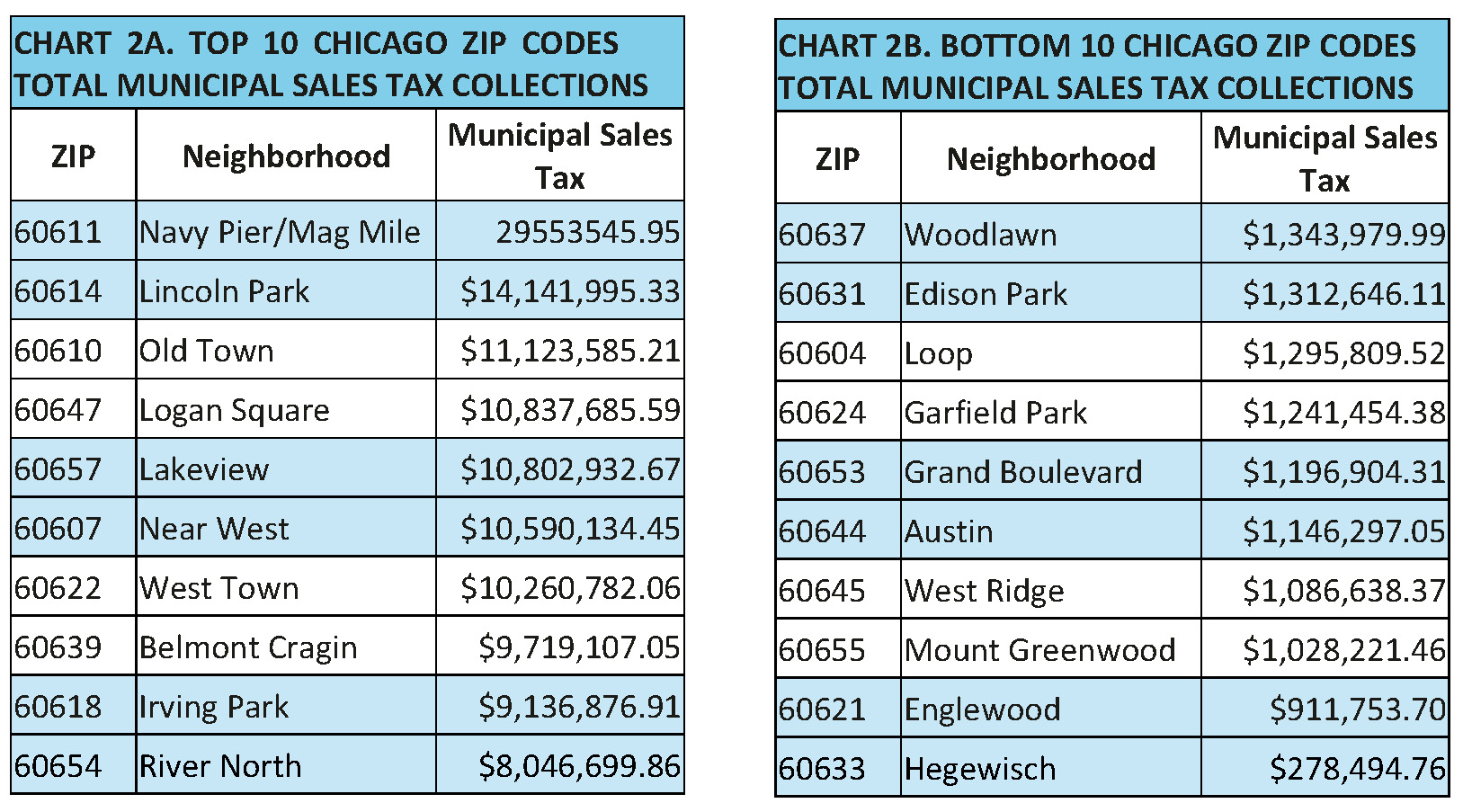 The Border Question
There are some peculiarities, particularly on the border.  ZIP codes do not respect the city’s boundaries so we can expect some oddities because the Census counts all the people in a ZIP code, while Chicago tax data only includes tax collected from sales within Chicago.  Still we see retail sales lower than we would expect in several ZIPs that are wholly on the Chicago side of the border:  60630 (Forest Glen and Jefferson Park), 60655 (Mount Greenwood), 60631 (Edison Park), and 60633 (Hegewisch).  Proximity to Chicago’s borders makes it seem likely that residents are leaving Chicago to make purchases.

Under Illinois law, municipalities may enter into rebate agreements with retailers to encourage them to locate within their boundaries by sharing a portion of the sales tax collected.  Chicago does not enter into these agreements, but according to data compiled by the Chicago Metropolitan Agency for Planning, in 2019 there were 118 such agreements in Suburban Cook County and 545 in the seven-county region around Chicago.  Municipalities near Chicago entering into such agreements may be responsible for more retailers opening outside city borders than would otherwise be the case, drawing shoppers from Chicago.  In August we showed that Chicago had fewer big box stores than the rest of the state and if rebate agreements contribute to those location decisions it could explain the city’s low per capita sales in ZIP codes near the border.

Conclusion
Retail sales per capita within Chicago vary greatly by neighborhood.  As we had postulated, they were particularly high downtown, driven by business, retail, and tourism operations located there.  However, particularly in the Loop, the per capita numbers are inflated by relatively low numbers of residents, and these neighborhoods do not generate the highest volume of retail sales overall.

The ZIP codes that generate the largest levels of retail sales come from North Michigan Avenue and Navy Pier, followed by Lincoln Park, Old Town and Logan Square.  Interestingly, three of Chicago’s top 10 generators of retail sales have per capita sales below the $15,000 statewide average.  In other words, even neighborhoods with fairly high sales volume from a City-wide perspective fall below the statewide numbers.