In 1994 the Democratic candidate for governor, Dawn Clark Netsch, had championed an income for property tax swap.  She lost.  Two years after vanquishing Netsch, Gov. Jim Edgar appointed the Governor’s Commission on Education Funding (known as the Ikenberry Commission after its chairman, University of Illinois President Emeritus Stanley O. Ikenberry) to make recommendations on school funding.

The commission wrestled for 10 months with the question of how to fund public schools and released its recommendations in March of 1996.  The commission’s final report came not as proposed legislation but in the form of eight identified principles to serve as the cornerstone of a new school funding system:

We will focus on the two pieces of the tax swap, principle 3, providing property tax relief, and principle 7, finding a replacement tax that will grow over time.  Although the tax swap was not consummated – the legislation that followed passed the House but foundered in the Senate when lawmakers were confronted with the prospect of unhappy constituents whose property tax savings would be eclipsed by their income tax increase — the effort exemplified the difficulties involved.  This article looks at how the principles of the Ikenberry Commission report would work today and what lessons can be taken from the effort.

Background
Let’s start by examining the two elements of the “tax swap,” the property tax and the individual income tax:

Income Tax
When the commission produced its report in FY 1996, individual income tax collections were $6.1 billion (at a 3 percent rate).

Overall, property taxes have increased more than did the income tax, but the income tax rose at a much higher rate, driven by the temporary 2011 income tax rate hike and the permanent hike that followed in July of 2017.

Property Tax Relief
While much of their report focused on educational reforms, central to the Ikenberry Commission report was the need to reduce property taxes.  Its last sentence read, “Absent the property tax rollbacks advocated by the Commission, the funding equation is unbalanced and should not be pursued.”

Further, the commission identified other concerns that needed to be addressed, including a method to prevent other taxing districts from raising taxes to offset the savings and institution of a hold harmless provision so that school districts did not see an immediate drop in school aid payments.  They also suggested tax caps for school districts statewide and overall reform of the property tax system via a separate commission.

For the key question of defining “substantial,” they settled on a 25 percent reduction in school operating taxes, or about $1.5 billion.  After 20 years of growth, an equivalent figure today would be $3.7 billion.

New Revenues
For replacement of the reduced property tax revenues the Ikenberry Commission turned to the “usual suspects” but focused on the income tax:

The primary source of new funds should be the state income tax.  Other funding sources that could supplement an increase in the income tax include:

1)  Efficiencies in state government;
2)  Natural revenue growth; and
3)  An expansion of the state sales tax base.

The rationale for the income tax increase was that Illinois had a lower tax than other states.  The report said Illinois’ individual income tax represented 1.8 percent of personal income, compared to a nationwide average of 2.2 percent.  It also said that of the 41 states with an income tax, Illinois had the second lowest rate.

Those factors have changed since 1986.  Illinois’ individual tax collections have moved from its historic below average position to above average, largely due to the increase in tax rates, temporarily in 2011 and then permanently in 2017.  Though it is difficult to compare tax rates because many states have a graduated rate structure, Illinois’ tax rate is also clearly no longer significantly below average.  Nine states have no income tax on wages, four flat-rate states now have lower rates than Illinois, and two graduated-tax states have top marginal rates below Illinois’ 4.95 percent.

The chart below shows where Illinois stood compared to other states in terms of the percentage of the state’s economic activity that is paid in personal income taxes.  It shows Illinois slightly below the national average at the 3.75 percent tax rate in effect in 2016 and estimates where Illinois would have stood in 2016 had the current 4.95 percent rate been in effect. 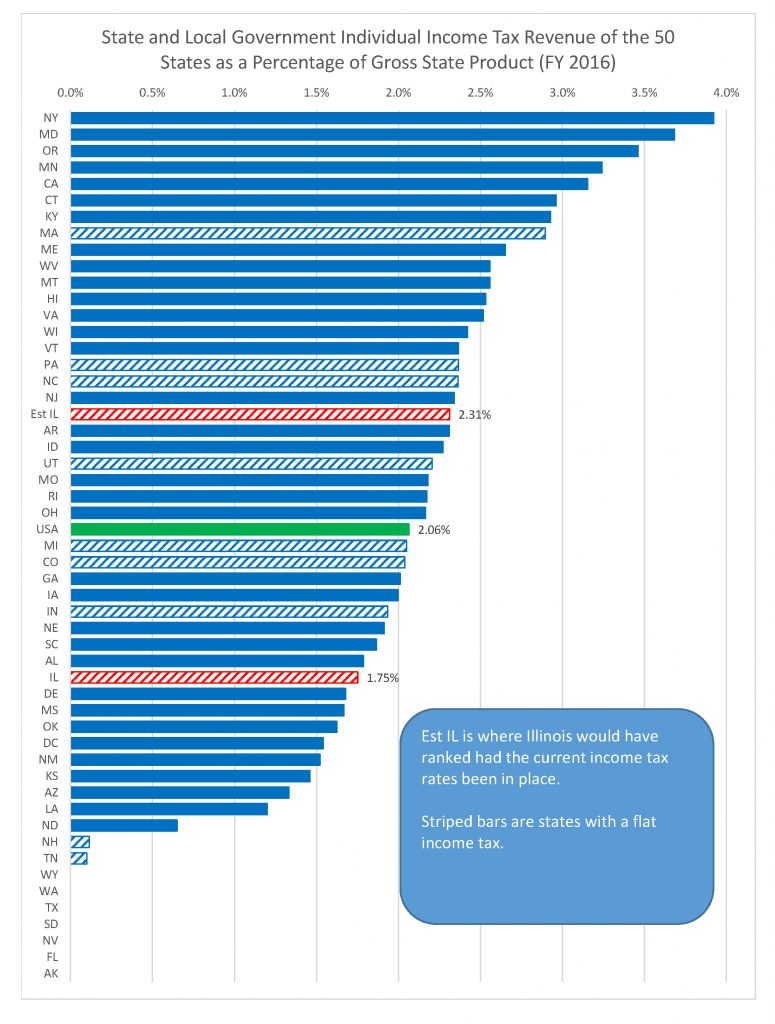 The commission also advocated for broadening the sales tax to services.  They noted that while Illinois had the sixth highest sales tax rates, its sales tax revenues were somewhat below average at 2.2 percent of personal income vs. 2.6 percent of personal income.  The report attributed that to the fact that a broad array of personal and consumer services, groceries and drugs were not taxed, and said adjustments could provide funding for schools.  Unfortunately, they were working with bad data as the Census Bureau had made a mistake in incorporating Illinois’ 1990 sales tax reform effort into federal data.  See “U.S. Census to Correct Billions in Sales Tax Reporting Error,” Tax Facts, May 2017.  Further, although Illinois’ sales tax is generally limited to tangible personal property, many services have been subjected to excise taxes, and when sales and excise tax collections are combined, Illinois is at the national average.

Many of the efficiencies the Commission sought as a mechanism for reducing the need for additional funding have been squeezed out during the years of no budget, and the “natural revenue growth” cited as another revenue source has been negative in recent years, when spending has grown faster than revenues.

To sum it all up:  on the revenue side, the 2011 temporary income tax rate increase, along with the 2017 permanent rate hike, have made the income tax for property tax swap that was central to the Ikenberry Commission’s report much more difficult to achieve today.   The significant policy change that has been discussed – changing Illinois’ income tax from a flat rate to a graduated rate – falls far short of raising the $3.7 billion needed for a tax swap. The Center for Tax and Budget Accountability, one of the main champions of a graduated rate structure, has published proposals that would raise $2 billion.  There are other differences to consider, as well.

Differences Today
Illinois’ finances are much weaker today than when the Ikenberry Commission made its report. The Comptroller’s Traditional Annual Budgetary Financial Report makes the difference clear.  In 1996 Illinois ended the fiscal year with a negative $292 million budgetary balance in the general funds.  That means the state pushed $292 million in 1996 spending into FY 1997.   For FY 2017 (the latest year available), the negative budgetary balance was $7,984 million.

Looking at it more simplistically, the $3.7 billion or so needed to provide today’s equivalent of what the Ikenberry Commission deemed “substantial” property tax relief must compete with a host of fiscal stressors:

$1 billion hole in the FY 19 budget
The current year’s budget was precariously balanced by assuming the sale of the Thompson Center in Chicago and counted savings from a pension buy-back program that took longer to launch than anticipated.  The budget watchdog Civic Federation reported on its Institute for Illinois’ Fiscal Sustainability blog on Nov. 20 that the state budget that was narrowly balanced on paper when it passed, was now showing a deficit of more than $1 billion.  The FY 2020 hole, without more revenue or less spending, will be larger, on the order of $3 billion.

$7.1 billion bill backlog
As of February 19, 2019, the comptroller reported that the state had nearly 105,000 unpaid bills, a backlog totaling $8.1 billion, because there was simply not money to pay them.  In 1996, after a difficult first term, Gov. Jim Edgar, nicknamed Governor No, had slashed spending and begun to restore the state’s fiscal position.

$7.3 billion for Education
The resources needed to finance the new Evidence Based Funding school finance reform, at current costs, are identified as $7.3 billion, over 10 years.

$130 billion in pensions.
The state’s unfunded pension liability is not a current liability in the same sense as the bills in the backlog calculations, but it represents a substantial need for future funds.

$? capital program
There is significant demand for a capital program to address the State’s infrastructure needs.  These programs are usually financed through dedicated revenue streams, like the gas tax, and not the State’s general funds, but nevertheless represent yet another area potentially competing with property tax relief for funding.

The R-word
Finally, there is talk of economic slowdown (or even recession) in the air.

Conclusion
The Ikenberry Commission was the high-water mark for efforts to replace local property taxes with state revenues.  They had a far easier task than policymakers do today: the income tax capacity they proposed to tap has been used, and Illinois is in far worse financial condition.  Even then, policy makers ultimately failed to adopt their plan.

The $3.7 billion needed to provide the equivalent of what the Ikenberry Commission deemed to be substantial property tax relief will be hard to find today.