In July of 2021, when we looked at what Illinois sales tax receipts could tell us about the economic effects of the COVID pandemic, we saw that, pre-pandemic, Chicago was more than 25% below the Statewide average in per capita sales tax collections (after adjusting for differences in sales tax rates) or taxable sales per capita. That surprised us. We had assumed the tourism and business activities there, in addition to higher prices of goods in Chicago, would produce higher than average taxable sales, or at least totals close to the State average. In this article we examine some possible causes underlying Chicago’s low taxable sales per capita.

As the discussion and data below indicates, there is no single explanation. Our analysis found that the largest factor is lower taxable sales from auto dealers and gas stations in Chicago. As expected, eating and drinking establishments catering to tourists and business customers generated a substantial amount of sales, but not enough to offset the lower sales from other types of retailers.

Methodology
We look at Calendar Year 2019, a period before COVID turned retailing on its ear. Our sales tax information comes from the Illinois Department of Revenue, which tracks collections by sale location in order to distribute funds to the proper local government. Specifically, we look at the 1 percent tax administered by the Department of Revenue as part of the State 6.25 percent tax rate applicable to all taxable purchases everywhere in Illinois (including general merchandise, groceries and medicines, and vehicles) and allocated to the jurisdiction where the sale occurred: the Municipal Sales Tax (MT) in cities and villages and County Sales Tax (CT) in unincorporated locations. Because it is a 1 percent tax rate, by moving the decimal point 2 places to the right, we can track taxable retail sales (i.e. $1 in tax means there were $100 in taxable retail sales). Although we first noticed the Chicago anomaly in per capita taxes collected, we frequently convert the data to taxable retail sales because such differences are more meaningful to readers. 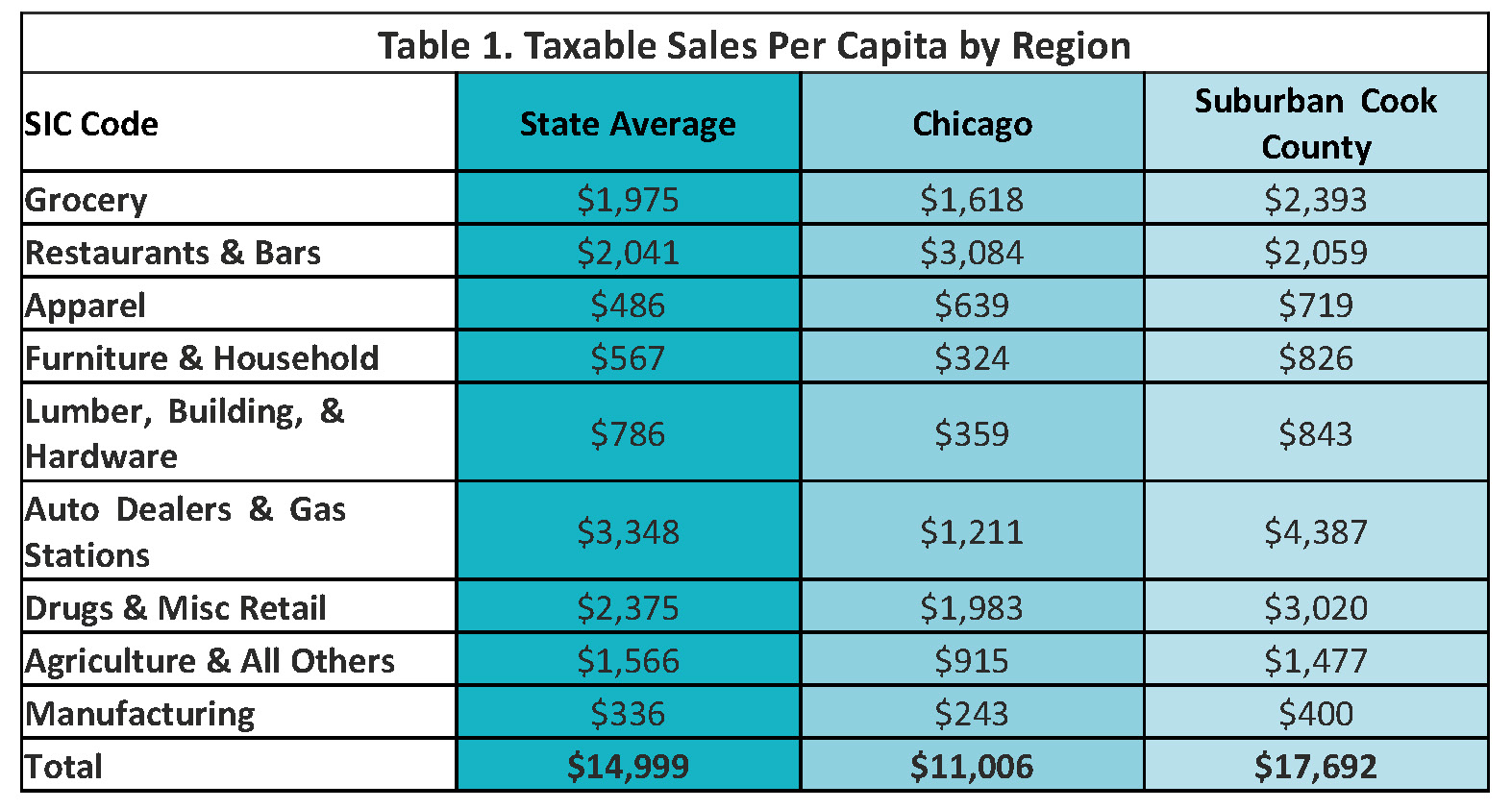 We were expecting the taxable sales from Chicago to be more similar to suburban Cook County instead of below the State average.

The largest difference between Chicago and the State average, in absolute dollars, is auto dealers and gas stations, explaining over 50% of the difference between Chicago’s average and the State’s average. The taxable sales per capita in Chicago is $2,137 below the State’s taxable sales per capita. The fact that Chicago lags the State in this category makes sense because City residents can use Chicago’s public transportation system, so buy fewer cars and less gasoline. The data backs this up, to some extent: Chicago has 21% of the State’s population, but according to the Secretary of State, only 15% of passenger vehicle registrations. However, this sales tax data indicates that less than 8% of sales in this category occur in Chicago, much lower than the car ownership percentage.

There are a few possible explanations:

A combination of all three of these likely contributes to the below average sales tax amounts.

Why would Chicagoans leave the city to buy gas or vehicles? First, gas is notoriously more expensive in Chicago. Motor fuel costs more in Chicago for several reasons, including higher motor fuel taxes and increased costs of operating in Chicago. Driving only a few blocks could save taxpayers a lot, and many probably make the effort.

However, for a Chicago resident, the price of a vehicle purchased in Chicago and surrounding communities should be about the same. For most merchandise categories, the location of the retailer can result in different sales tax rates and many communities outside of Chicago do have lower tax rates, but Chicago purchasers cannot escape the Home Rule Vehicle Use Tax by purchasing outside the city, because that tax is based on the car-owner’s address, rather than the location of the sale. Therefore, there does not seem to be a financial reason for a Chicago consumer to purchase a car outside of Chicago. The most likely explanation for cross-border purchasing of vehicles, then, is that there are more automobile dealers located outside of Chicago than in Chicago. Chicago purchasers go to where the sellers are.

Per capita taxable sales from bars and restaurants in Chicago are above the State average, as expected. The primary driver of this is increased tourism in Chicago compared to the rest of the State. Another factor is employees that commute to Chicago that may have lunch or dinner (or both) in Chicago instead of where they live. Chicago’s taxable sales are $1,043 more per capita from bars and restaurants than the State average. However, this is not enough to offset the deficit in other categories, like auto and gasoline sales.

Chicago’s taxable sales per capita in most categories is below the State and suburban Cook County’s per capita figures, but not significantly. One possible overarching explanation may be that there are fewer big box retailers in Chicago compared to the rest of the State, when adjusted for population.

Table 2 shows that while Chicago has 21% of the population of Illinois, it generally has less than 21% of the big box stores in Illinois. (We do not have store-specific sales data, which naturally varies by location, but for this purpose simply looking at number of stores is instructive. Similarly, we do not know which SIC code these retailers report under, so cannot attribute the differences to a particular category in the IDOR data.) The next question is do Chicago residents make more of their purchases at smaller retailers in Chicago compared to the average Illinois resident, or do they travel to the suburbs, where the big box stores are, to make their purchases. The answer is likely a combination of both. Chicago residents closer to the suburbs are probably more likely to venture to big box stores in the suburbs than residents closer to the core of Chicago.

There are likely numerous explanations of why are there fewer big box stores in Chicago than the suburbs: regulations, zoning, cost of land, tax incentives, and others, but this question is outside the scope of this article.

Our focus so far has been on traditional “bricks and mortar” retail transactions, but internet retailers generate a considerable amount of sales and have some unusual (and evolving) tax consequences, so their tax situation warrants a special discussion. In 2019, the most recent year this data is available, internet sales were often subject to use tax instead of the retailers’ occupation tax, and use tax receipts are not reflected in the tables in this article. Sales subject to use tax are not sourced to a single municipality, but instead the 1% municipal share of the 6.25% tax rate collected Statewide is distributed to local governments via a population-based formula. Due to recent law changes, many of these sales are now subject to the retailers’ occupation tax, and are sourced to the location of the delivery (the customer’s home, for example). Some internet sales are sourced instead to the location of an in-State warehouse, although that was also the case in 2019, the year of our data. It is possible that Chicago residents are more likely to purchase items on the internet, so in future years the gap between Chicago and Statewide per capita tax collections may close as the Municipal Sales Tax (MT) increases to reflect those destination-sourced transactions, but internet sales are not reported separately, so we are not likely to have the data to make a definitive determination.

Conclusion
At first blush, it is surprising to see that (pre-pandemic) per capita taxable sales in Chicago are significantly below the State-wide average. Upon closer examination, though, at least part of the differential is quite logical. A big component — though not complete – of the explanation for Chicago’s lower per capita taxable sales is lower car ownership and gasoline sales in Chicago. There are also numerous indications that Chicago residents go outside the city to make retail purchases.

We may never be able to identify and quantify all of the reasons why Chicago taxable sales per capita lag the Statewide average, but there is data that can shed additional light on buying patterns in the City. In future articles we will look at how sales tax collections vary in different neighborhoods in Chicago and at the relationship of household income to sales tax collections.

Our main article uses 2019 data to compare taxable sales in Chicago to the rest of the State. We chose that year for several reasons: we have more granular data, so can (and will) take a deeper dive into things like neighborhood differences; and it is the last year before the disruptions created by the Covid pandemic. But—it is still important to know whether 2019 was an outlier. Have Chicago’s per capita sales consistently lagged the rest of the State? 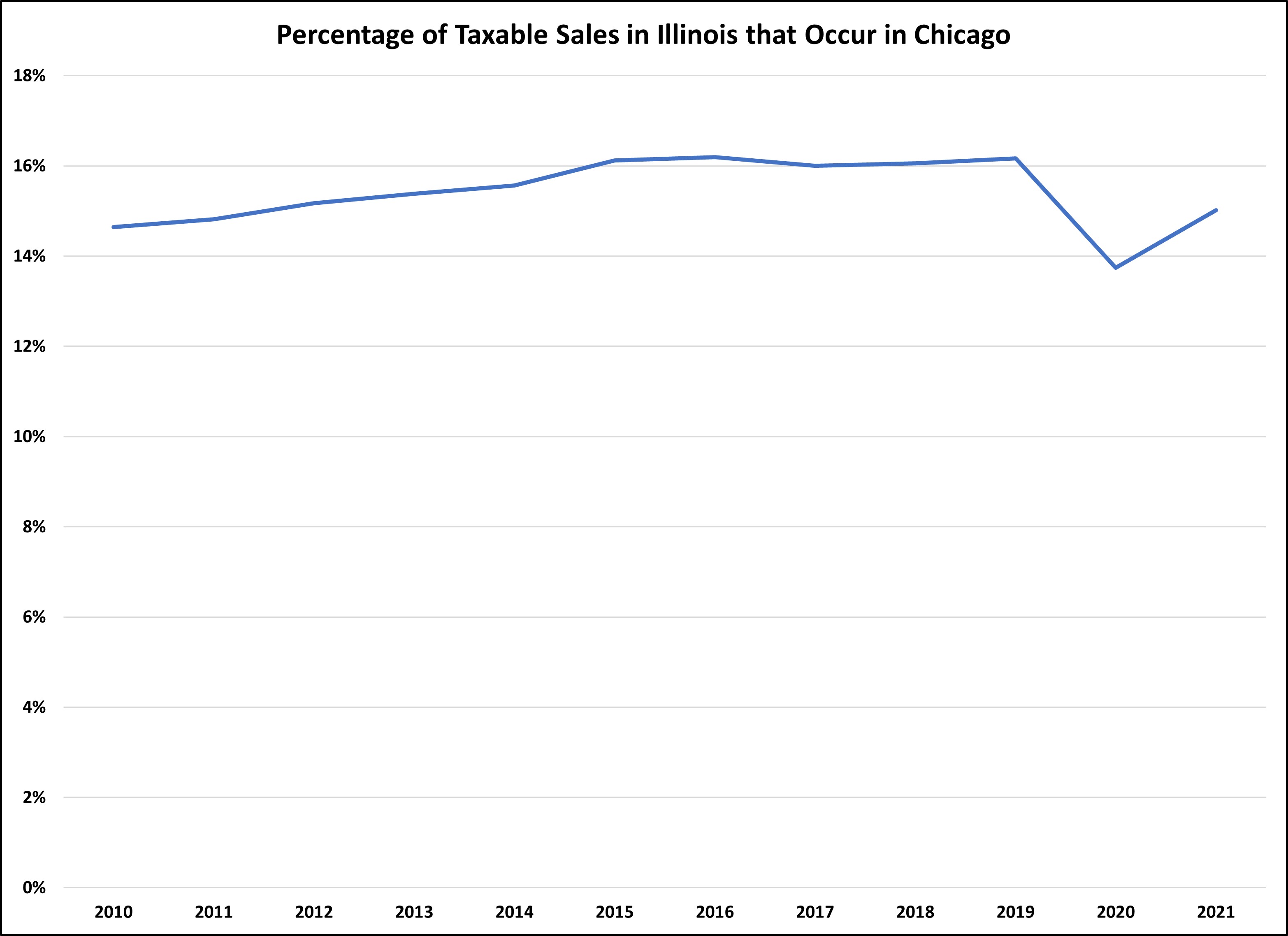 As the chart above indicates, the level of taxable sales in Chicago as a percentage of Statewide sales has remained at or below 16% for the past decade, even though roughly 21% of Illinois residents live in the City. There was a gradual increase in the years leading up to the pandemic, but it is clear the 2019 phenomenon we analyze in the main article is not an aberration.

Why are Chicago’s Rates so High?

As discussed in the main article, at 10.25%, the sales tax rate in the City of Chicago is notoriously higher than that in most surrounding communities. (It is lower for qualifying drugs and groceries, and higher for meals purchased in certain parts of the City.) As the bar chart indicates, this total tax rate is comprised of a number of separately imposed taxes. The State-imposed State-wide rate of 6.25% has 3 components: the 5% “State Rate” that goes to the State, the 1% “State Municipal Rate” imposed by the State that goes to the municipality where the sale occurs (the “MT” used in our main article to calculate and compare sales per capita), and the 0.25% “State County Rate” imposed by the State that goes to the county where the sale occurs. The other taxes (1% RTA Rate, 1.75% Cook County Rate, and 1.25% Chicago Home Rule Rate) are imposed by the respective government bodies and administered by the State. According to the Illinois Department of Revenue, more than 40 municipalities impose higher local sales tax rates than Chicago’s 1.25% Home Rule Rate, although the total rate may not exceed 10.25%, depending on what other local rates apply.