People frequently ask how taxes in Illinois compare to those in other states. The answer to that question depends on who you ask. Advocates for increasing government spending present statistics that show Illinois as a low-tax state, while those who want a more limited role for government present statistics that show Illinois as a high-tax state. We are releasing a series of Tax Facts articles attempting to provide a true picture of where Illinois stands. The January issue of Tax Facts looked at the overall tax climate in Illinois, and now we are focusing on income taxes.

• First, it is imperative to look at state and local taxes combined. Some states pay for services with state funds, while others leave that funding to local governments and local taxes. Furthermore, a person buying $100 worth of groceries and other household goods usually does not know (or care) who imposed the sales tax on those goods, and which government receives the tax.
• Secondly, we contend that tax collection rankings should reflect different economies in different states (which often reflect different costs of living and income levels). For example, let’s assume

States A and B both have a flat income tax rate of 5%, but in State A the median personal income is $50,000, and in State B the median personal income is $55,000. As a result, the median State A resident would pay $2,500 in income taxes and the median State B resident would pay $2,750. Even though the two states have the same rate, the State B resident pays more in absolute dollars, but she also has more after-tax income. Does State B have higher taxes, or are they equal? We would posit that they are equal, so a per capita comparison would not adequately capture the differences between State A and B. To reflect this properly, we look at taxes as a percentage of gross state product (the total value of all goods and services produced within the State) to arrive at the percentage of economic output diverted to taxes.

INDIVIDUAL INCOME TAXES IN ILLINOIS ARE ABOVE AVERAGE 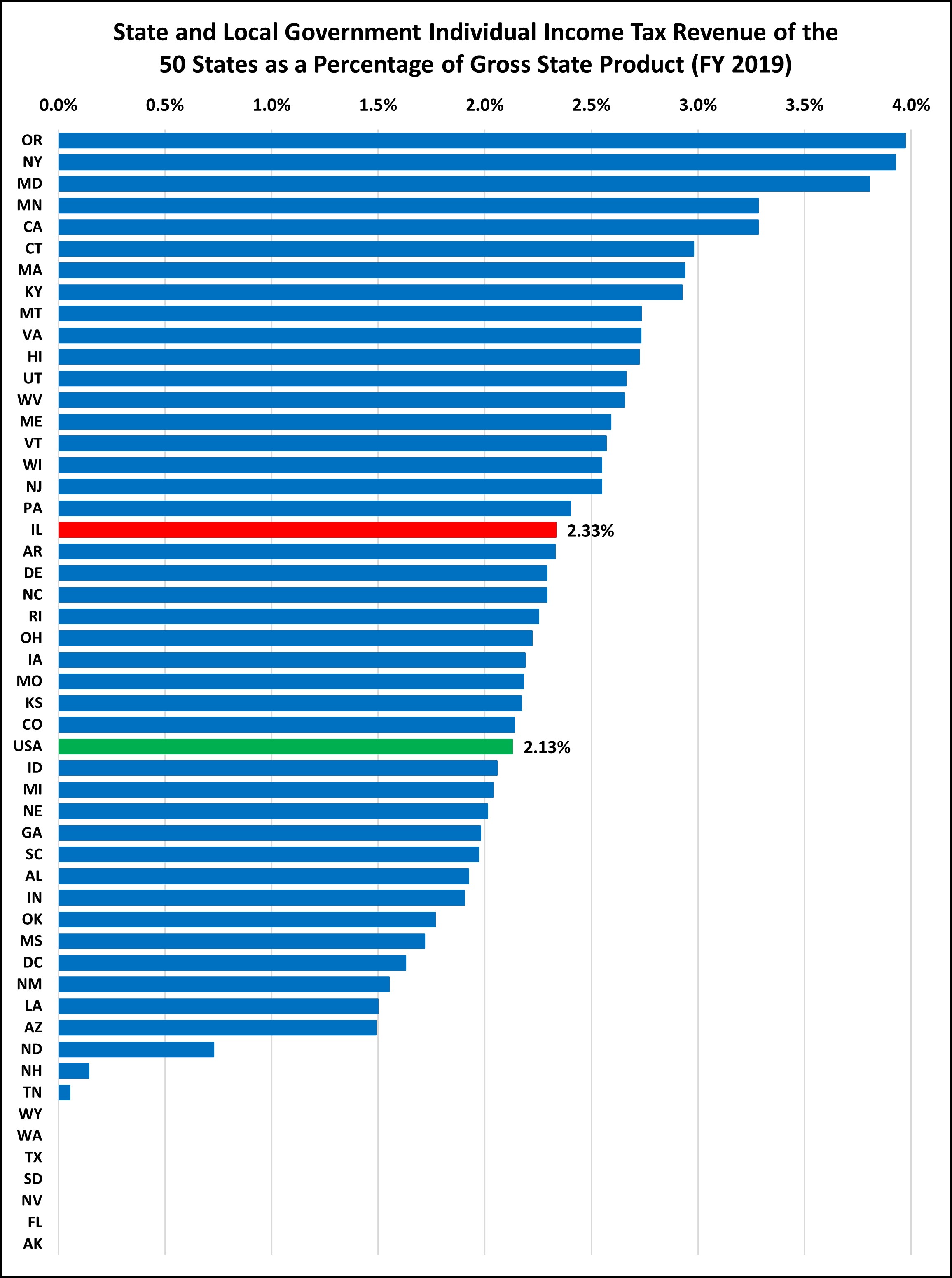 Some say that income taxes are high in Illinois. This chart shows that individual income taxes as a percentage of gross state product are indeed above average, but not significantly. And there are plenty of states with even higher taxes. It may come as a surprise to see that our neighbors Wisconsin and Kentucky collect more than Illinois. Keep in mind, however, that an individual’s personal results can vary significantly based on their income level, especially in states with a graduated rate structure.

ILLINOIS INDIVIDUAL INCOME TAXES HAVE HISTORICALLY BEEN BELOW AVERAGE 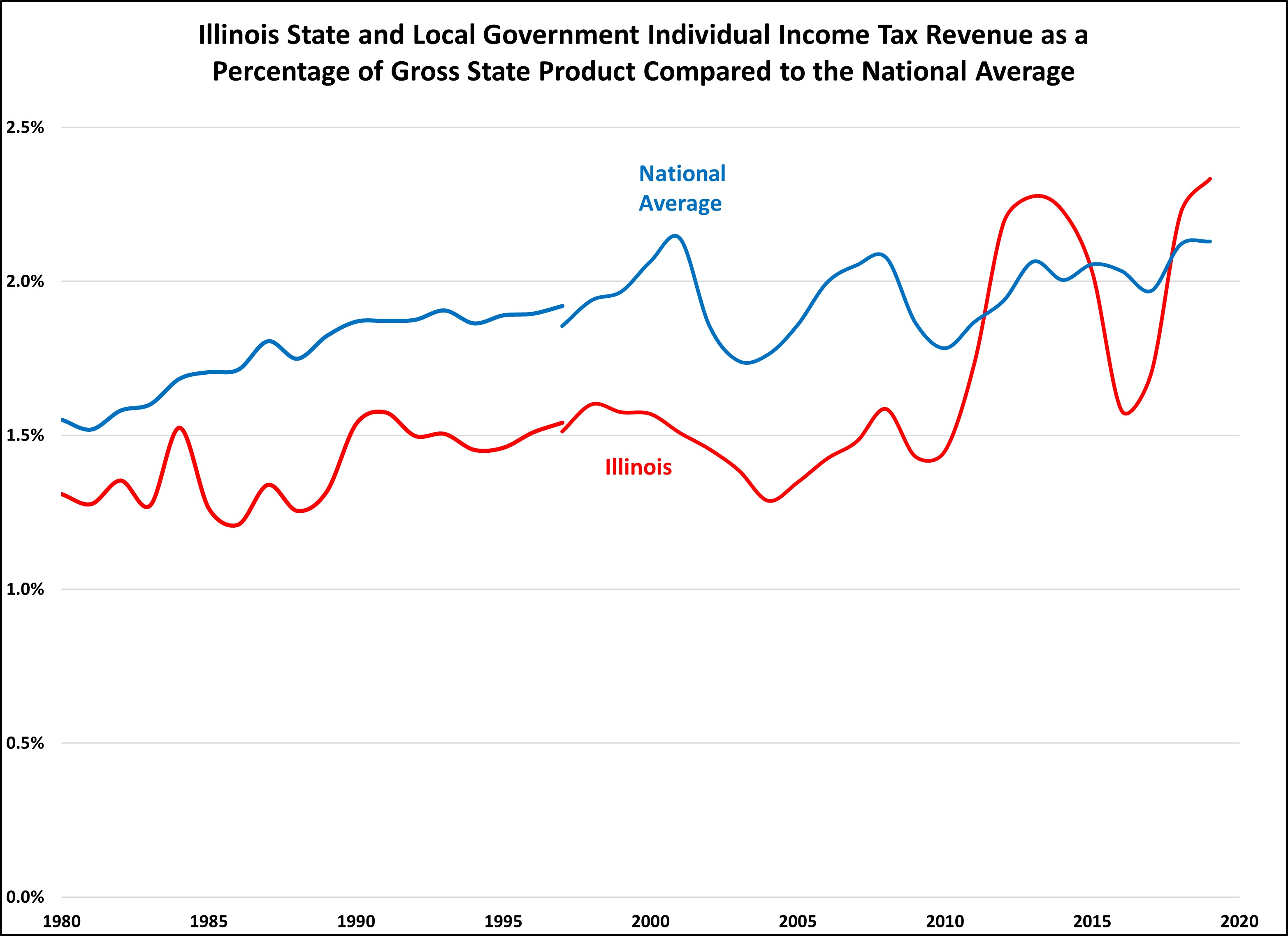 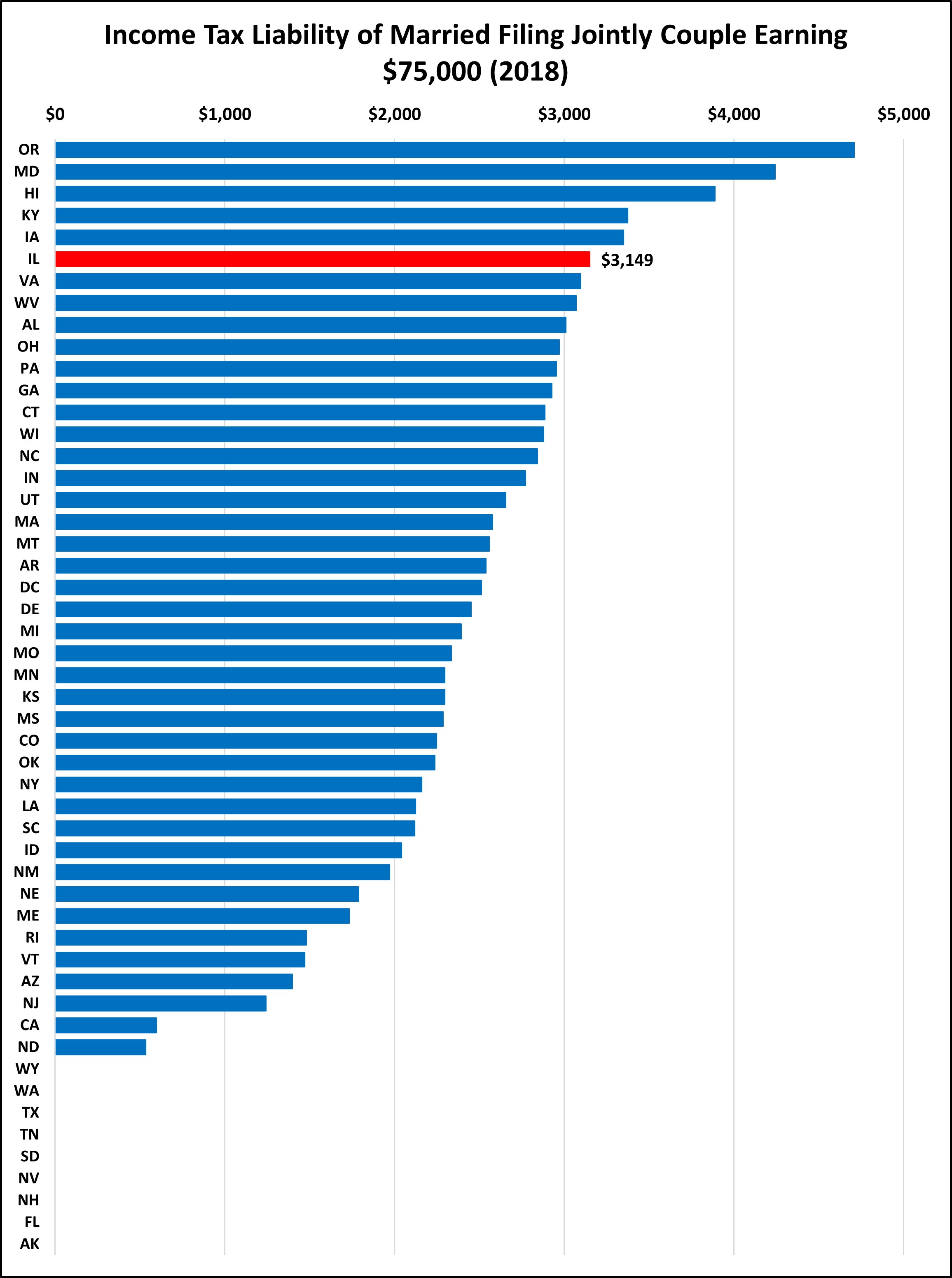 These two charts show how different taxpayers fare in Illinois compared to other states, depending on the taxpayers’ income levels. California is considered a high tax state, but a California family earning $75,000 pays a fraction of what an Illinois family at that income level pays. 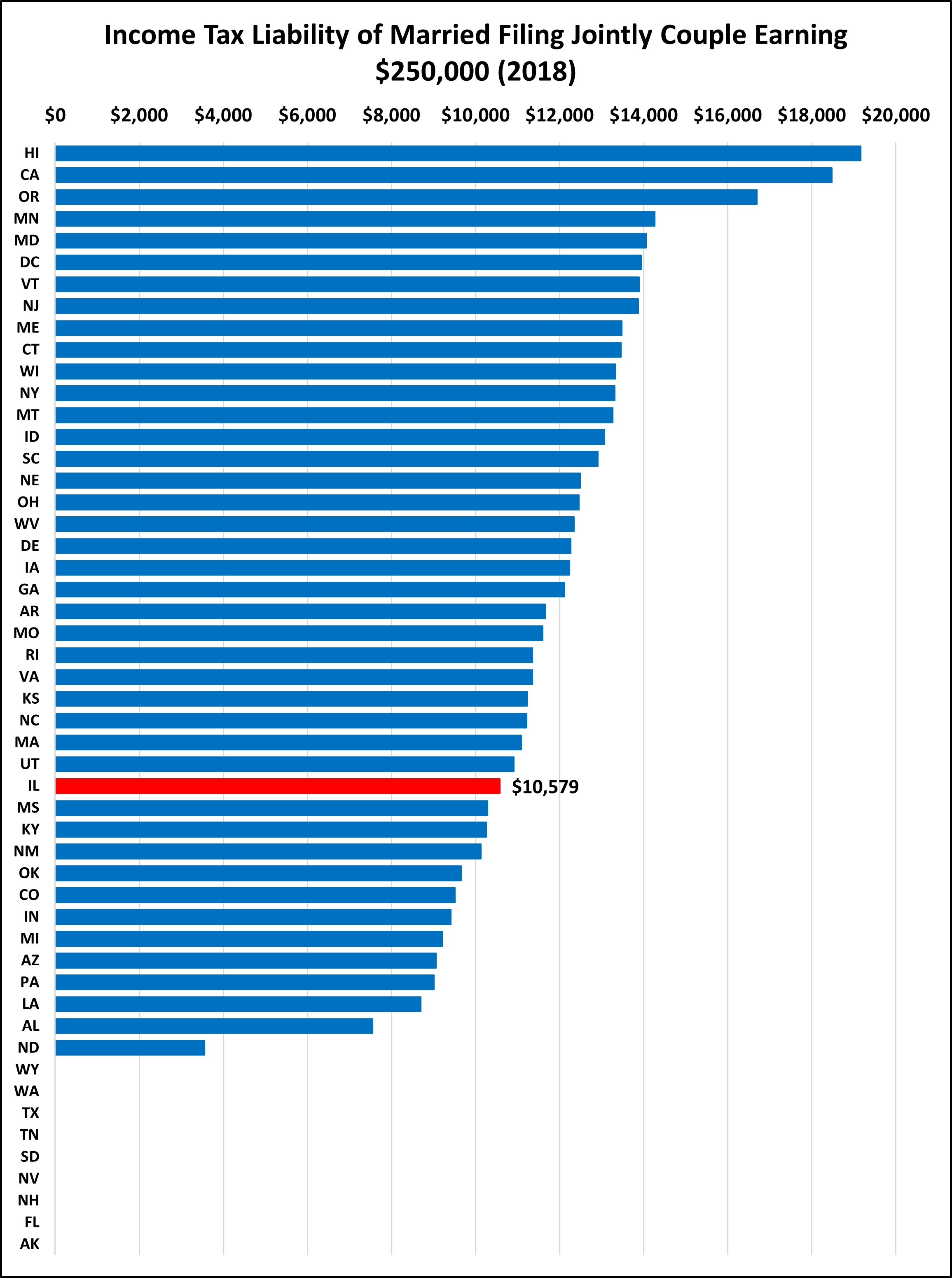 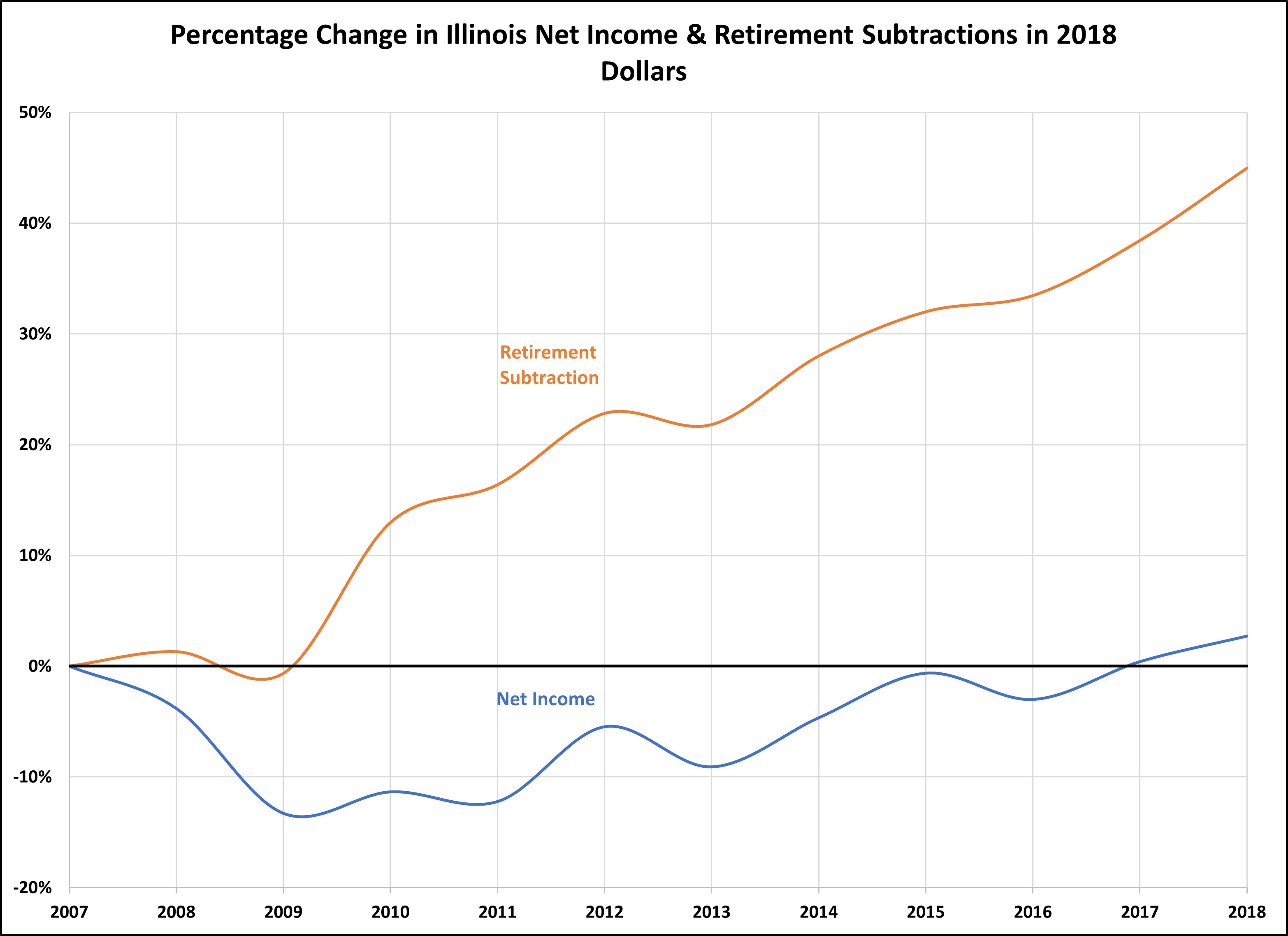 All retirement income, whether or not it is taxed by the federal government (and most of it is), is exempt from Illinois income tax. This chart shows the growth in the retirement exemption and the income tax base since 2007 in 2018 dollars, to adjust for inflation. While the amount of income received but not taxed under this exemption grew by over 40% during this time period, the income tax base grew by less than 5%. This trend is likely to continue. In 2018, the retirement exemption cost $2.9 billion. 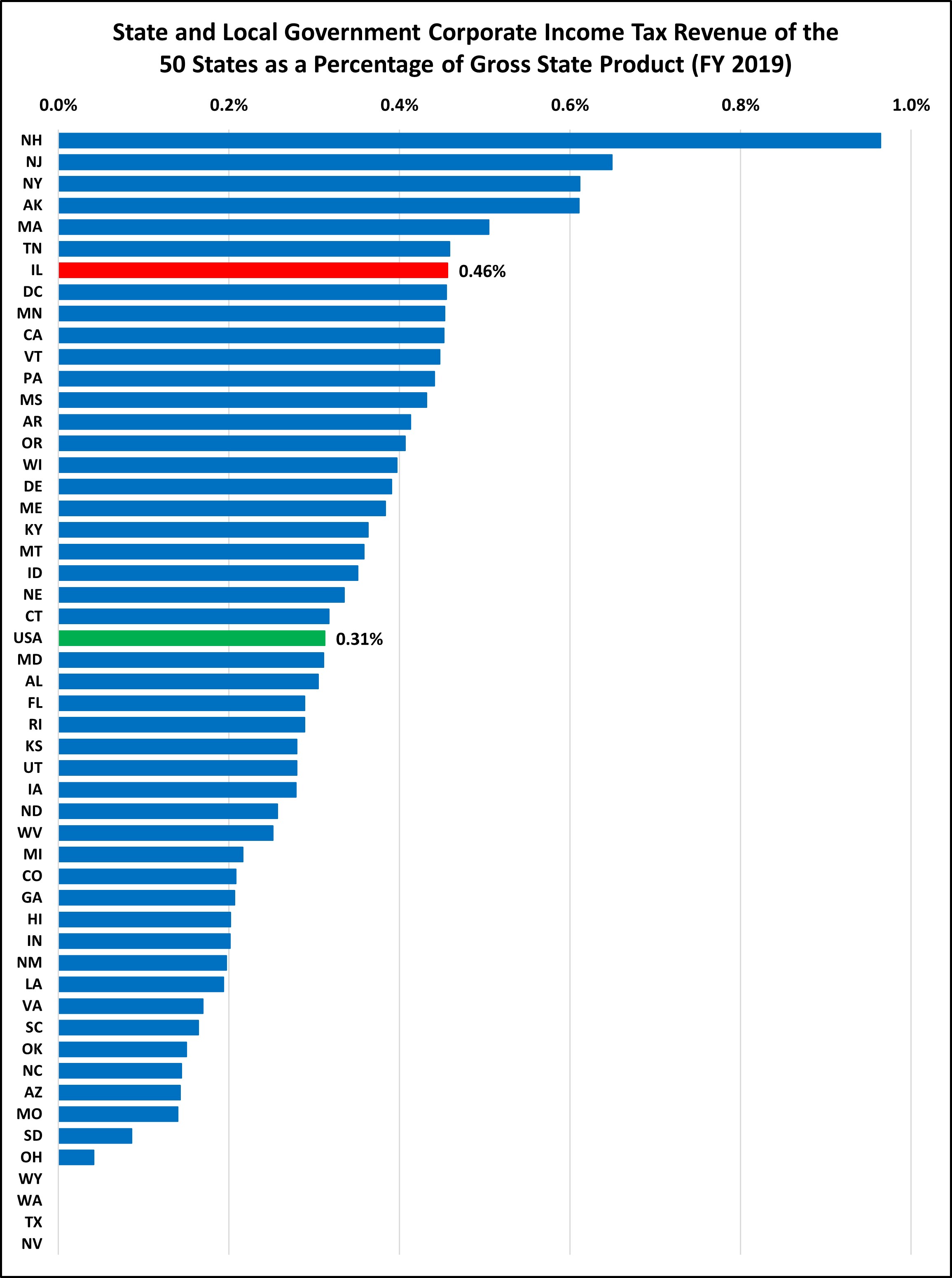 Illinois’ corporate income tax collections are clearly above average, partially due to Illinois’ high corporate income tax rate. This category includes any income taxes imposed on businesses but not individuals, so Illinois’ personal property tax replacement income tax, which is paid by C corporations and certain pass-through entities, is included. Gross receipt taxes, such as Texas’ margin tax and Washington’s business and occupation tax (which are generally considered more like an income tax) are considered a sales tax by the Census Bureau and thus are not included. 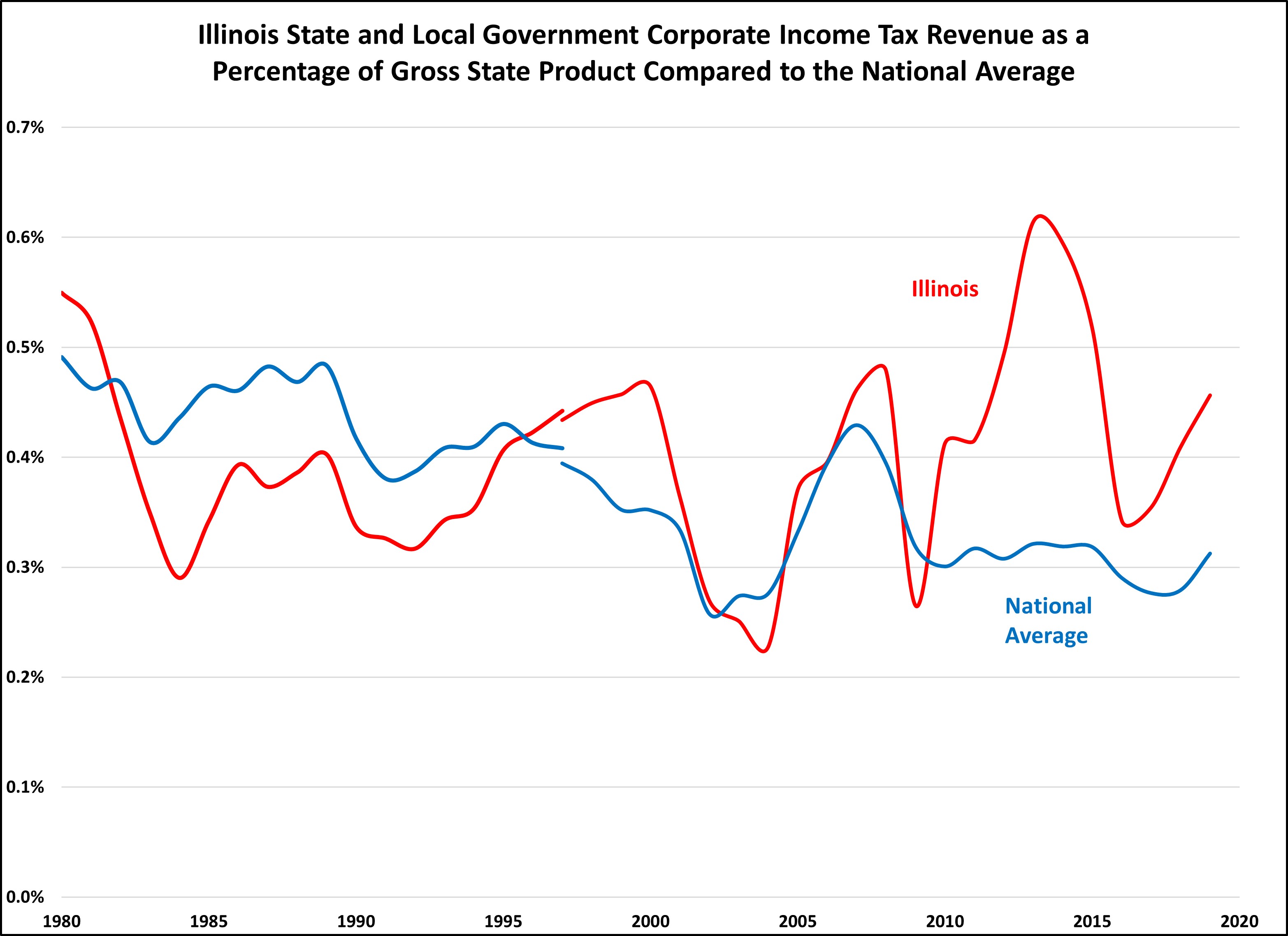 The corporate income tax is one of the most volatile taxes, and as this chart shows, it has been particularly volatile in Illinois in recent years. This is largely due to changes in rates, but the suspension of the net operating loss deduction, and its reinstatement in 2015, was a contributing factor. When comparing states, it is important to look at historical trends; a single year may be an outlier and focusing on it can lead to inaccurate conclusions. 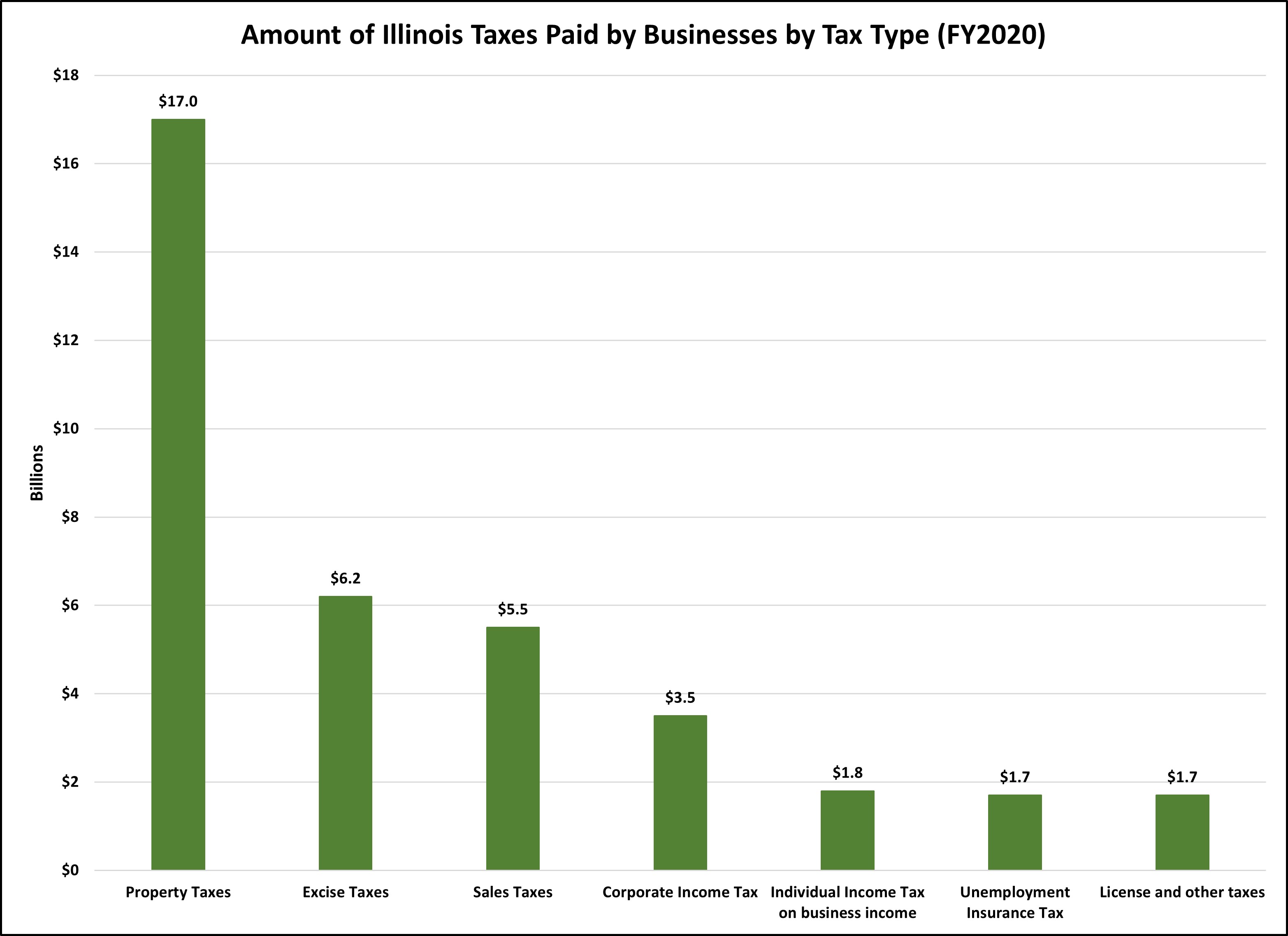 ILLINOIS’ FRANCHISE TAX IS AN OUTLIER 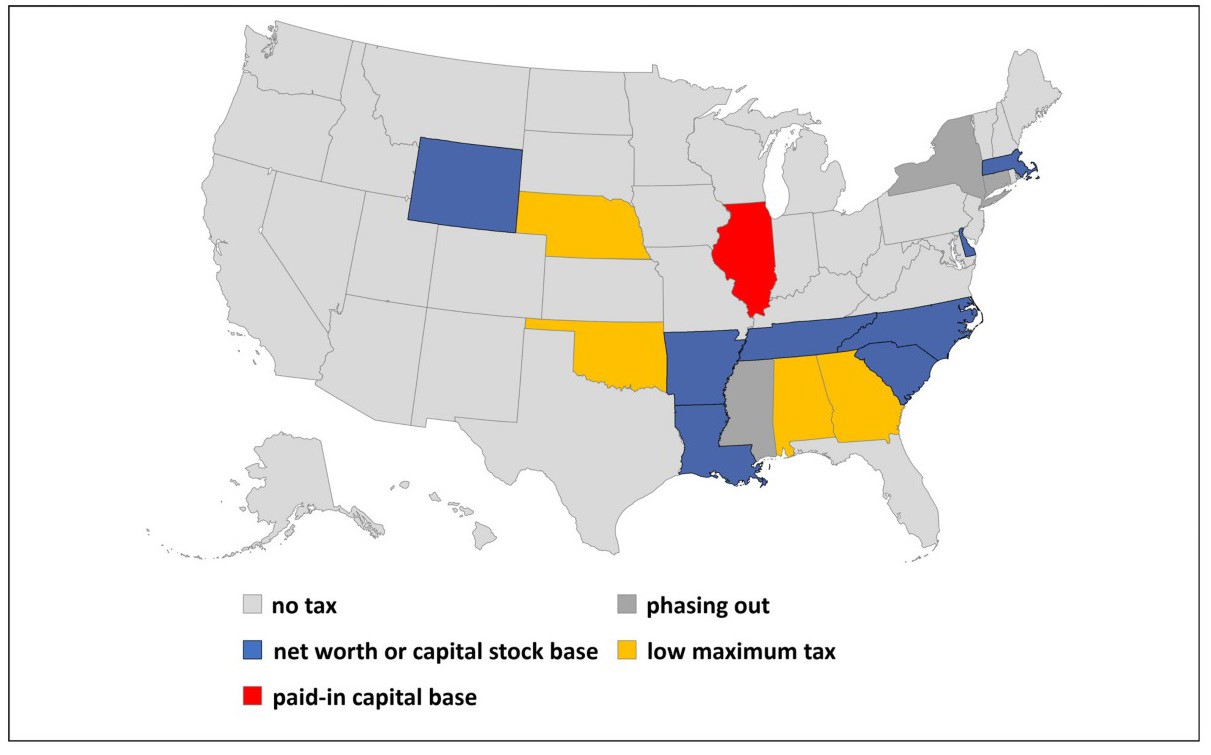 Illinois is one of the few states that still imposes a net worth or capital tax.   These taxes typically predate the federal income tax and were frequently temporary-turned-permanent measures to raise revenue from the business community when there was no other means to do so. Most states have since repealed their taxes as they have modernized their tax codes, and as this chart indicates, several others are in the process of doing so.  Illinois’ tax was also being phased out, beginning in 2019, but in 2021 the legislature repealed the repeal, effectively reinstating this antiquated tax.

Data from the Illinois Department of Revenue was obtained from their website or through a Freedom of Information request.

In 1997, the U.S. Bureau of Economic Analysis changed how gross domestic product and gross state product were calculated, resulting in a slightly higher value. This is why there is a break in the historical charts above.