The Taxpayers’ Federation of Illinois has long been an advocate of repealing Illinois’ antiquated and archaic franchise tax.  The tax is scheduled to be phased out over the next few years, but unfortunately there have been calls for its reinstatement.  This article summarizes its history, outlier status, and administrative complications.  For a more detailed discussion, see the March 2019 issue of Tax Facts.

What is the franchise tax?
The term “franchise tax” can cover a wide variety of tax structures. Usually, a franchise tax is a tax on corporations separate from the income tax (although a few states, like California, use the label for their corporate income tax). It is based on some measure of net worth or capital value.  The Illinois franchise tax was enacted in in 1872.

The Secretary of State administers Illinois’ franchise tax along with a number of business fees. For example, corporations pay $150 to file articles of incorporation, $50 to amend articles of incorporation, $25 to change registered agents, and so on. Although revenues from these fees are frequently lumped together with those from the true franchise tax, our focus is only on tax itself, and not on the activity-based fees.

Illinois’ franchise tax is actually three separate taxes, all based on paid-in capital. “Paid-in capital” is, essentially, the funds raised when a corporation issues stock, plus any additions to capital (usually subsequent investments by new or existing shareholders).  Paid-in capital is neither revenue nor net worth; instead, it is the money used to build a business.

When a corporation first registers with the Illinois Secretary of State it pays an “initial tax” on its paid-in capital in the state, at a rate of 0.10%. Each year thereafter, a corporation pays an “annual tax” at the same rate (0.10%).  Finally, there is an “additional tax” on increases to paid-in capital, at a rate of 0.15%. The annual and initial taxes have a minimum of $25 and a maximum of $2 million, but the additional tax has no cap.   Legislation was passed in 2019 to phase out all three components of the tax, starting with a $30 reduction in 2020 liability (effectively reducing the minimum due to $0) and ending with a complete repeal of the tax in 2024.

What do other states do?
While most states charge corporations an annual fee to operate in their state, Illinois is one of only a few states to tax corporations based on a measure of their net worth or capital stock. The map below shows the states that currently impose franchise taxes. Connecticut, New York, and Mississippi, like Illinois, are in the process of phasing out their taxes, leaving only twelve states with a tax like this. (Kansas, Missouri, Ohio, Pennsylvania, Rhode Island, and West Virginia have all repealed similar taxes in recent years.) Of those remaining, three (Arkansas, Delaware, Nebraska) are based solely on the number of shares issued and par value of the stock, rather than on the value of the entity or its capital. The maximum tax payable in Alabama ($15,000), Georgia ($5,000), and Oklahoma ($20,000), while not de minimus, effectively turn those taxes into graduated annual filing fees. 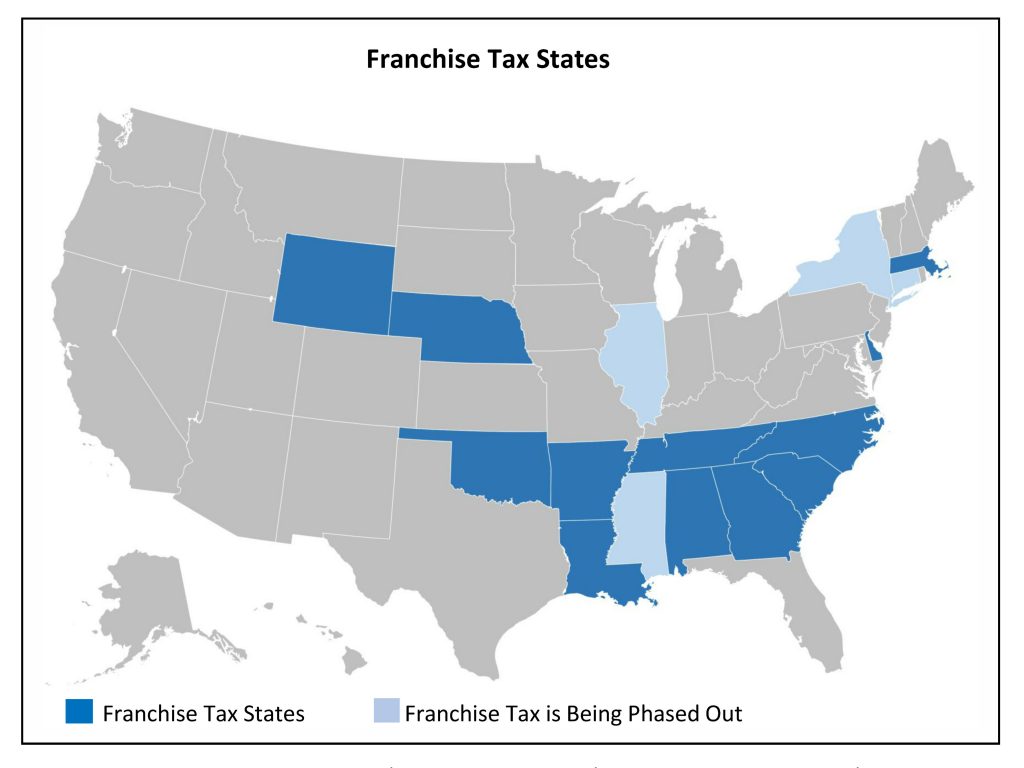 There are only six states, then, that impose a tax roughly equivalent to Illinois’ franchise tax. Those remaining six (Louisiana, Massachusetts, North Carolina, South Carolina Tennessee, and Wyoming) base their taxes on a more traditional base—total assets or net worth as reported on an entity’s books and records or on its federal income tax return—rather than Illinois’ paid-in capital base.  Illinois truly is an outlier.

The franchise tax is a flawed tax.
The five-year economic development plan released by Governor Pritzker in October 2019 contained eight variations of the following statement, a clear recognition that the Illinois franchise tax is flawed and its repeal a noteworthy accomplishment:

The governor worked with the General Assembly to eliminate the Corporate Franchise Tax, which posed a significantly high compliance burden and penalized businesses for locating or expanding their operations in the state.

A tax on net worth or capital stock results in pyramiding—a single investment may be taxed multiple times.  It is not unusual for businesses to operate using multiple legal entities under a parent corporation.  This can be for any number of reasons—regulatory requirements, accommodating new investors, or simply a legacy of business expansion.  This very common structure frequently leads to a disproportionate tax liability.  For example, assume two investors form Company A with $10,000.  After a few years Company A expands into a slightly different business, so it forms a new subsidiary, Company B, investing $10,000.  A few years later, Company B purchases 90% of the stock of a new venture in the same line of business—Company C—for $10,000.  Each year thereafter, that original $10,000 investment is taxed under Illinois’ annual franchise tax 3 times because it is part of the paid-in capital of Companies A, B, and C.

A “good” tax is one that does not pick winners and losers based on artificial differences.  The pyramiding problem described above is one way the franchise tax fails this test.  Another occurs when debt is used, rather than equity. A corporation financed with debt, instead of owners’ investments, has lower paid in capital and thus lower franchise tax liability, resulting in two otherwise identical businesses paying very different amounts of tax.  For example, if the owners of Corporation X take out $1,000,000 in personal loans and then invest the funds in the Corporation, its paid-in capital will be $1,000,000.  Conversely, if the owners of Corporation Y invest $10 in the Corporation, but it borrows $1,000,000 (guaranteed by the owners), it will have the same $1,000,000 to operate its business as Corporation X, but face a much smaller franchise tax liability.

Illinois’ franchise tax has its own unique quirks, making it an outlier even among the few states still imposing this kind of tax.  As discussed above, Illinois does not use net worth or any standard measure of corporate value as its tax base; Illinois taxpayers must instead track and maintain separate calculations solely for the purpose of paying this tax.   Likewise, the apportionment method for Illinois’ franchise tax is different from that used for Illinois’ income tax, and from any apportionment method used for any other state’s tax, adding needlessly to the administrative burden associated with complying with this tax. And finally, Illinois’ franchise tax is administered by the Secretary of State rather than the Department of Revenue, which means separate filings, separate due dates, and a separate administrative regime.

Today the situation is different. Corporations are subject to a wide variety of taxes, including the much more substantial corporate income tax. On the other hand, the administrative and policy flaws associated with the franchise tax are significant. The Illinois General Assembly was right to begin the phase-out of the tax in 2019, the Governor was right to celebrate that accomplishment, and reversing course would reinstate a flawed tax with minimal revenue benefit to the State.

*Carol Portman has been the President of the Taxpayers’ Federation of Illinois since 2013.