by Maurice Scholten and Mike Klemens*

Cook County property taxes billed in 2021 rose by $534 million (3.4 percent), to $16.1 billion, as calculated by the Cook County Clerk’s office.  That does not mean every property owner’s tax bill went up, of course.  An analysis done by the Cook County Treasurer found that 46 to 48 percent of residential properties actually saw their tax bills go down. In this article we will review what happened, and why, to different kinds of property in different areas of Cook County.

There are two reasons that a property owner’s tax bill can increase:

For the past two assessment cycles (the North Triad for 2019 and the South Triad for 2020), Cook County Assessor Fritz Kaegi has increased non-residential assessments more than residential assessments, although overall those increases were rolled back significantly by the Cook County Board of Review.  See Chart 1.  Even after the Board of Review action, non-residential properties’ relative share increased.  The increase is small, but on a $16.1 billion base amounts to more than $350 million in taxes shifted off homeowners onto businesses.  The question is:  Will this pattern continue? 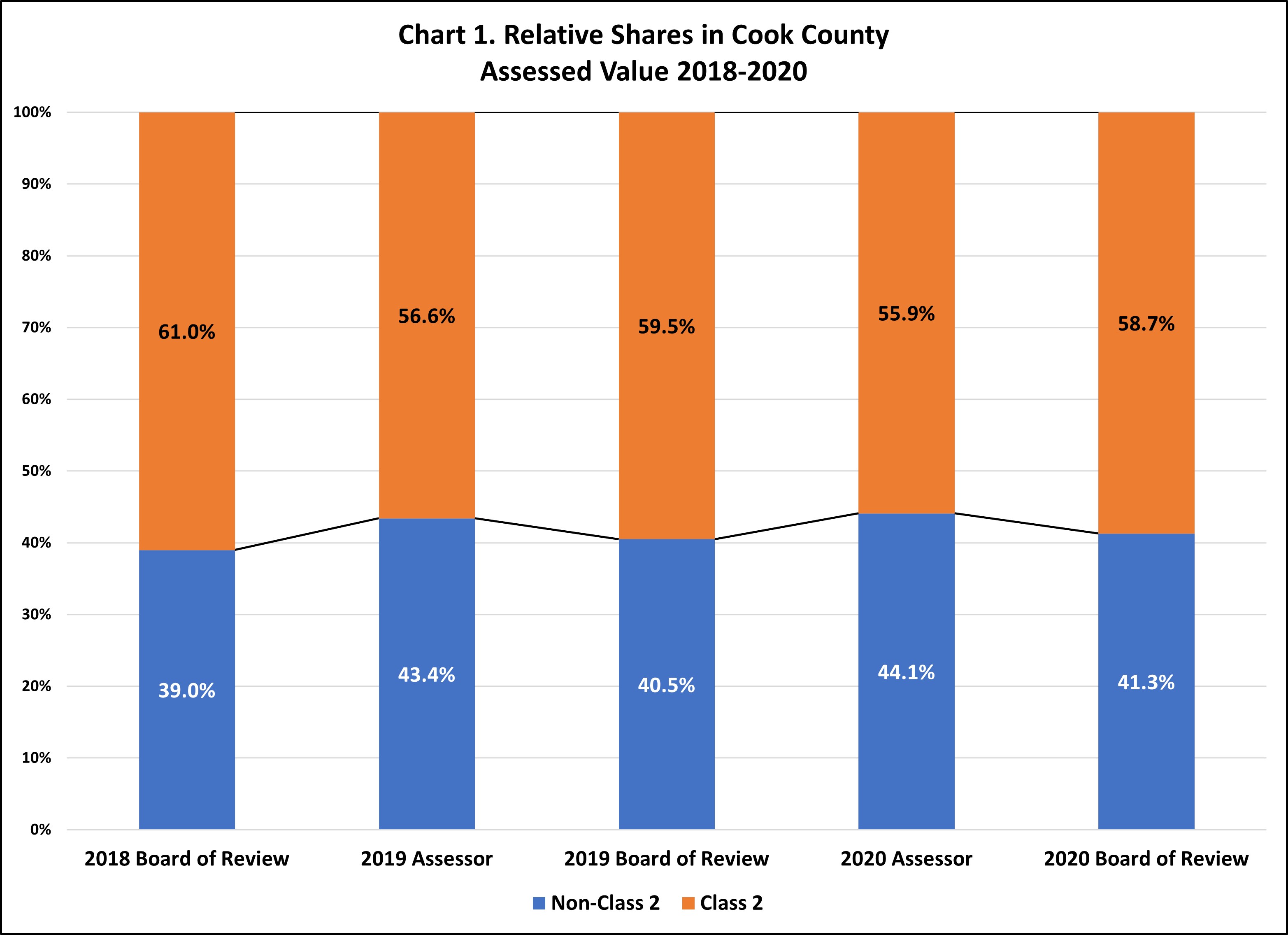 Reassessment for 2020
Cook County is divided into three triads for assessment purposes: (1) Chicago, (2) North (suburban Cook north of North Avenue), and (3) South (suburban Cook south of North Avenue).  One triad is reassessed each year on a rotating basis while the other two are held constant, except for new construction.  For 2020 taxes (payable in 2021) the South triad was reassessed.  As illustrated in Chart 2, the South triad is the smallest of the three. 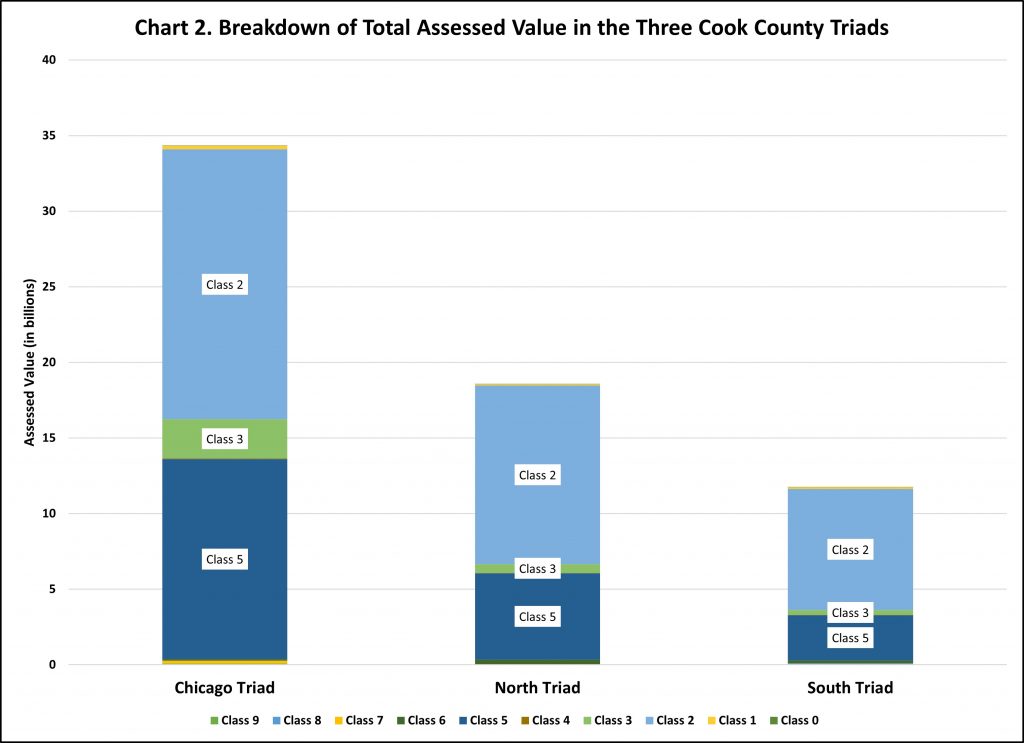 Reassessment is a two-step process.  First the Assessor determines values using models, internal review, and an informal appeal process with the property owner.  The property owner can then appeal the Assessor’s determination of value to the Cook County Board of Review, which has rolled back much of the Assessor’s increases for the last two years.

The dominant factor in the 2020 reassessments was a judgement made by the Assessor in the spring of 2020 to reflect the anticipated effects of the COVID-19 pandemic on property values countywide, not just in the South Triad that was being reassessed.  Assessments of residential properties were reduced approximately 10 percent across all three triads; the Assessor also made less substantial COVID-related reductions to some types of business properties. The COVID reductions for residential property had the effect of shifting relative share off residential properties and onto business properties, as shown in Chart 1.

Note: Based on values he has published for the first three city townships to be reassessed so far this year, Rogers Park, West Chicago, and Jefferson, the Assessor’s COVID adjustments reduced residential assessments in these three townships when property values were actually increasing.

Countywide, between 2019 and 2020 the Assessor reduced assessed value (AV) from $68.4 billion to $67.9 billion, primarily because of COVID adjustments.  After the Board of Review action, Cook County’s AV fell further to $64.6 billion.  In terms of relative share, the key question in whether a property’s tax bill increases or decreases, the trend of shifting tax burden off residential property and onto commercial, industrial, and apartments continued.  That held true even after the Board of Review rolled back much of the Assessor’s increases on non-residential properties.  See Chart 3. 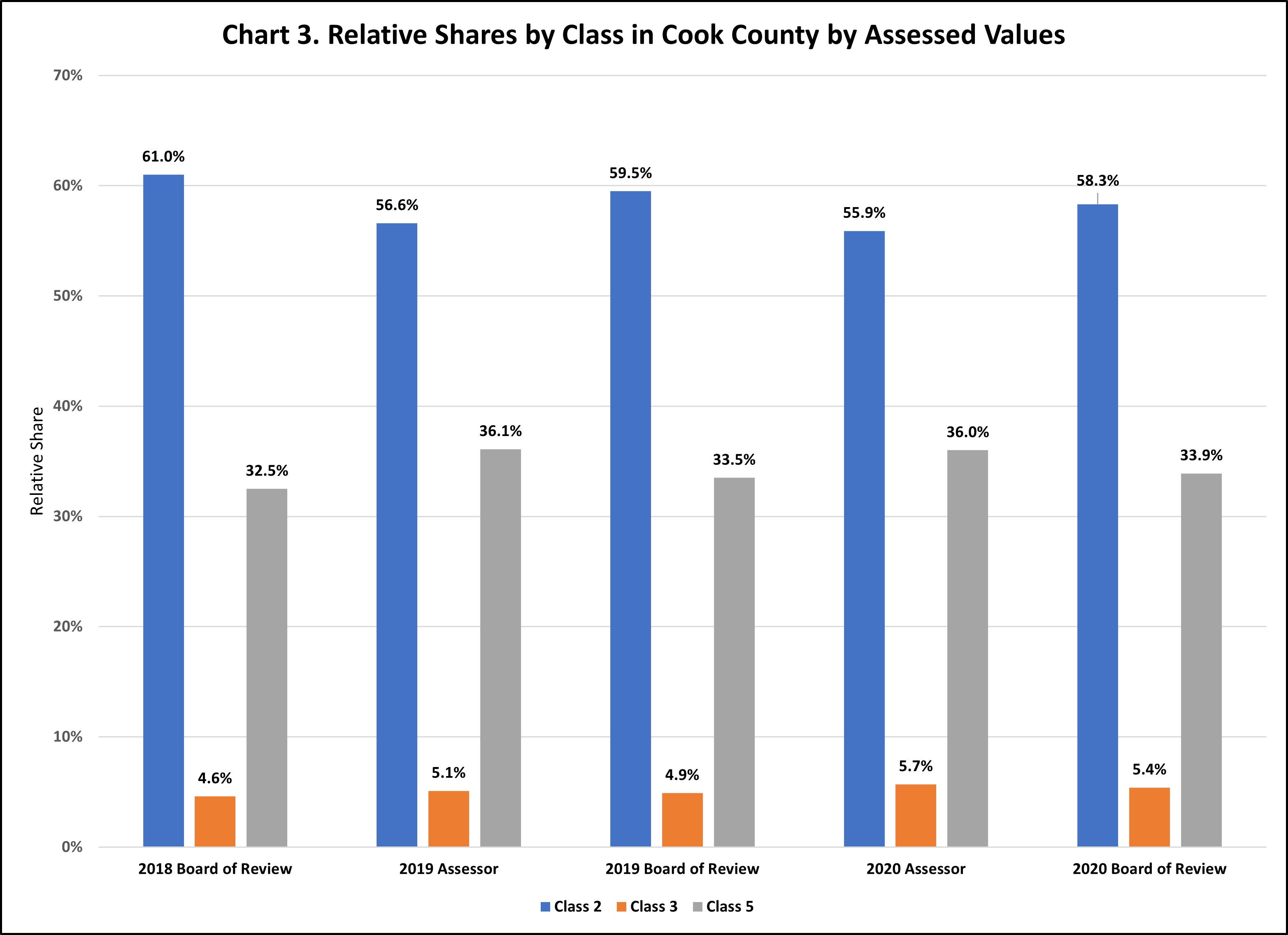 That same pattern was not true in the South Triad where properties saw both COVID adjustments that reduced assessments and reassessments that updated values since the last reassessment in 2017.  In each township in the South Triad, AV increased, although less than the Assessor first proposed, after the Board of Review’s reductions were taken into consideration.  See Chart 4. The differences between the Assessor’s and Board of Review’s determinations are more pronounced when we look at only commercial and industrial properties.  See Chart 5, looking at the difference in percentage increases proposed by Assessor (the blue bar) and finalized by the Board of Review (the orange bar).  By contrast, the differences between the assessor and Board of Review changes are far less steep for Class 2 properties (single family homes and small apartment buildings), as illustrated in Chart 6. 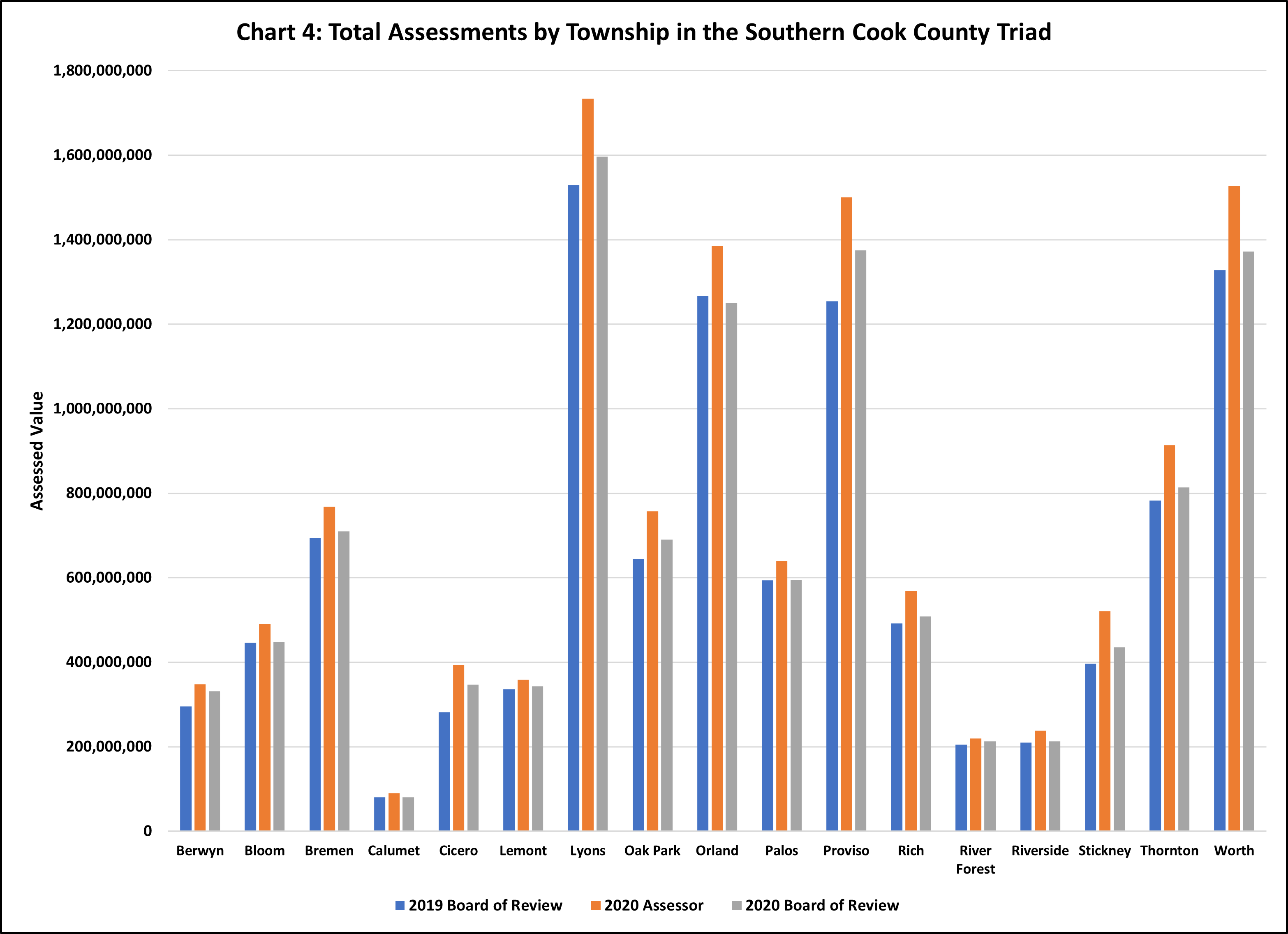 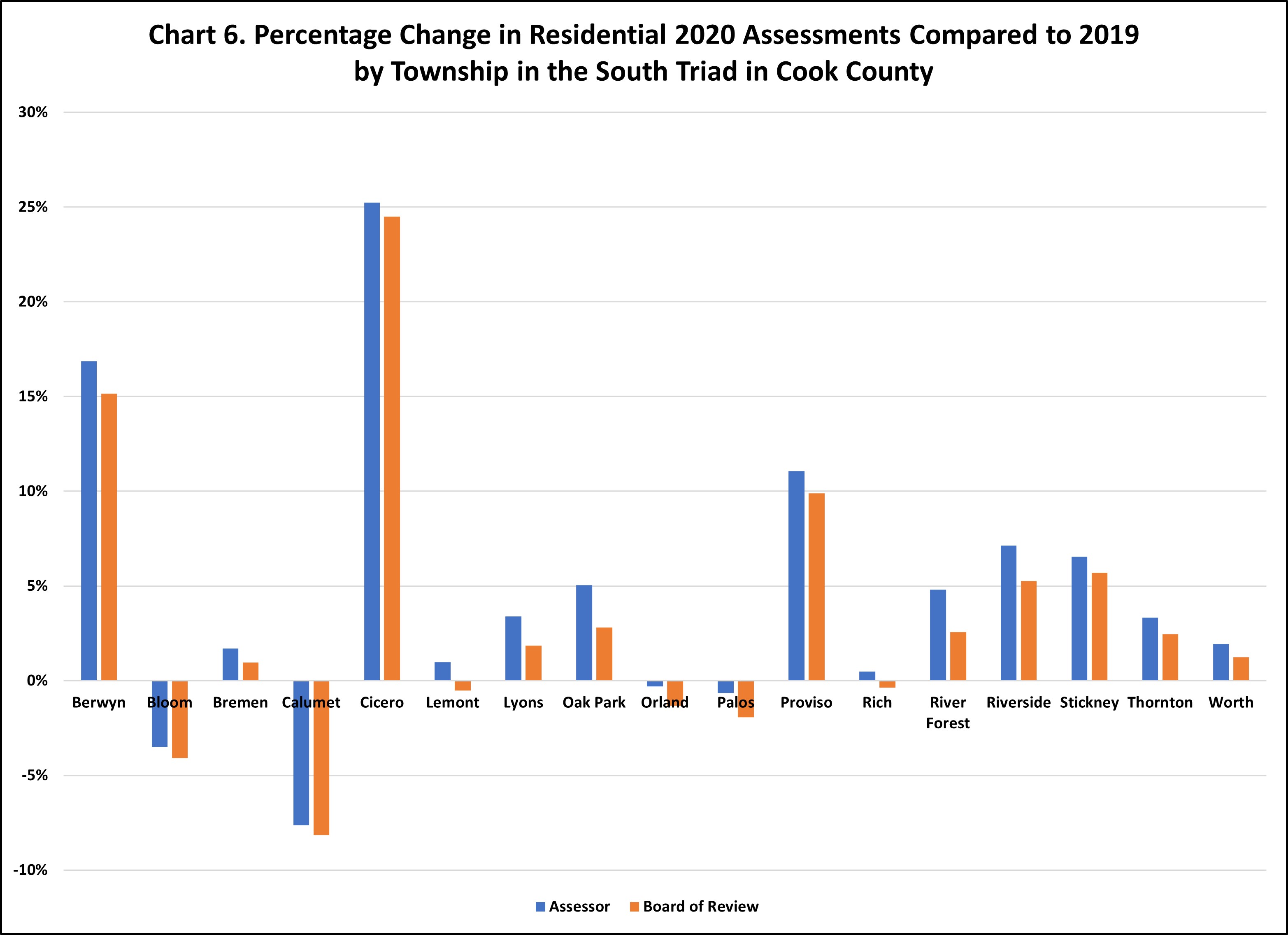 Equalization
Cook County’s overall assessed value (AV) assigned by the Assessor and modified by the Board of Review declined between taxes billed in 2020 and those billed in 2021. However state equalization which converts Assessed Value (AV) to Equalized Assessed Value (EAV) caused EAV to increase even though AV decreased.   The Department of Revenue is charged by statute with bringing the level of assessment to 33.3 percent in all counties to take care of taxing districts that cross county boundaries and to ensure the fair application of formulas (such as the school aid formula) that take property wealth into consideration.  The Department does this by calculating an equalization factor (frequently called the “multiplier”) that will be applied to the assessed value of each parcel to produce the equalized assessed value (EAV) against which property tax rates are applied after exemptions are taken.   The result was that for 2020 taxes billed in 2021 the countywide assessed value dropped 5.5 percent, the multiplier increased 10.5 percent (from 2.9160 to 3.2234) leaving the the Equalized Assessed Value 4.2 percent higher.

As Illustrated in Chart 7 the Cook County multiplier is the third highest in history, only exceeded by the multipliers in 2009 and 2010 when property values were upset by the real estate crash.  The long-range trendline (the dashed blue line on the chart) shows a continuing upward trend in the multiplier (and a declining level of assessment as measured by the multiplier calculations).

For a property owner looking at his or her tax bill, the multiplier was not the reason for an increase or decrease because it applies equally to all properties, keeping relative share unchanged.  The higher EAV created by the increased multiplier resulted in a lower tax rate when the clerk calculated the tax rate by applying the formula:

Major beneficiaries of the increased multiplier are Tax Increment Financing (“TIF”) districts, which accounted for 8.5 percent of Cook County taxes billed last year.  Because a TIF district’s revenue is based on growth in EAV over a base year, the districts would have seen less money but for the big jump in the state multiplier. 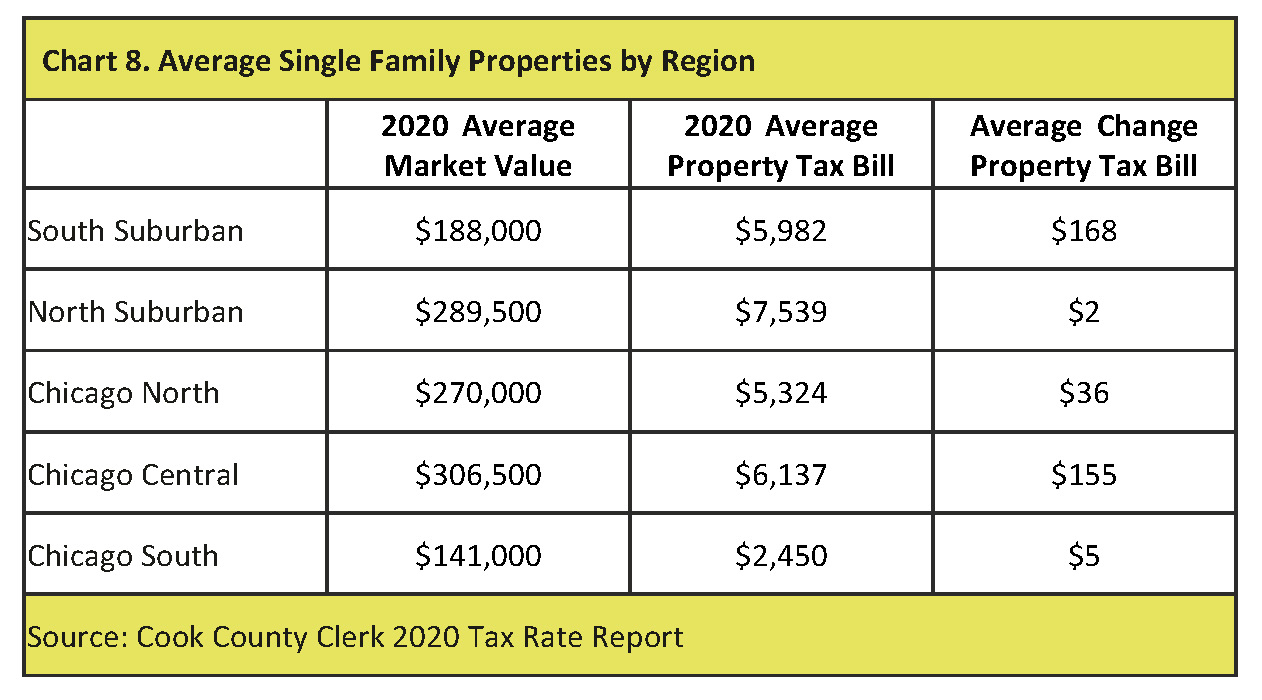 Outside View
An outside view of Cook County assessments comes from the studies that the Department of Revenue conducts to determine the multiplier.  Each year the Department compares sales of properties to the previous year’s assessed value in a sales ratio study, computes for arms-length sales the ratio of assessed value to sales price, arrays those ratios from high to low and picks the middle (median) ratio.  The Department’s studies look backwards so that no assessor can get a lower multiplier by reassessing only property that has sold.  For Cook County, the only county that classifies property, the department does the studies by major class of property.

For the 2020 multiplier the three-year median average levels of assessment calculated by the Department showed underassessments of:

Data from the same sales ratio studies give insights into the quality of assessments through several statistical measures calculated when the study was done.  The most current study compared 2019 sales to 2018 assessments, which gives the status before the current assessor took office.  When Assessor Kaegi took office, the Coefficient of Dispersion (COD), a complex statistic that measures how closely sales are bunched around the median (the shorthand is average assessment error), stood at:

Standards set by the International Association of Assessing Officers (IAAO) say residential COD’s should be no higher than 15 and other property should not exceed 20.  Without uniform assessments, property taxation cannot be fair.  The Department’s sales ratio studies have shown a long-standing lack of uniformity in assessments, particularly in non-residential classes.

Statistics produced from the sales ratio study can also point out whether higher priced properties are under or over-assessed.  The 2019 study showed a significant bias in which higher valued commercial, industrial and apartment properties were being underassessed.  Residential was biased towards higher valued properties, but to a much smaller extent and within IAAO guidelines.

The Cook County system of reassessing one third of the county and then leaving the assessments unchanged for two years almost certainly contributes to the lack of uniformity shown in the Department of Revenue studies, particularly at times when property values are in flux.

Currently the assessor is working on assessments in the Chicago triad which comprises the largest portion of the Cook County property tax base and contains the largest amount of commercial and apartment properties.  Again,  See Chart 2.  So far preliminary work has been completed on three townships with the following changes since the last reassessment in 2018 (percentage increases will be higher for Class 2 and non–Class 2 properties that received COVID reductions in 2020):

There are two major unknowns:  (1) the level of objections from Class 2 homeowners—last year’s 10 percent COVID reductions  are by and large going away, which will make for larger increases this year and may prompt more challenges;  and (2) the effect of the COVID pandemic on commercial property values in downtown Chicago.

Conclusion
In his first two years, the data show that Assessor Kaegi has attempted to shift property taxes from owner-occupied residential to business properties, a trend that appears to be continuing with the Chicago Triad.

The Cook County Board of Review has reduced but not eliminated that shift.

The Department of Revenue’s equalization calculations indicate that commercial properties have been underassessed in the past, but no more so than residential properties.  In short, they do not support that shift.

The Department of Revenue’s sales ratio studies have pointed out problems with assessment uniformity for years.  Next year’s study will be the first to measure the uniformity of Assessor Kaegi’s assessments, but then only in the North Triad.

*Maurice Scholten is the Legislative Director of the Taxpayers’ Federation of Illinois.  Mike Klemens does tax policy research for TFI.