This article provides a high-level summary of what income tax(es) Illinois businesses pay and how their tax liability is calculated. It is important to understand the basics in order to address the more complicated issues and concerns associated with Illinois’ income taxes.  We have also attempted to estimate how much income tax is paid by businesses.

Tax on Business Income Varies by Entity Type
There is a widely held misconception that all businesses pay corporate income tax, and that individual income tax applies only to wage and personal investment income.  The reality is more complicated.  What tax is paid on a business’s profits – whether it is corporate income tax, individual income tax, or personal property tax replacement income tax (“PPRT” or “Replacement Tax”), or some combination of the three – depends on the business’s organizational structure.

Businesses operate as sole proprietorships, partnerships, corporations, or limited liability companies.  Generally speaking, Illinois taxes these business forms in the same way as the federal government, as discussed below and summarized in the table on page 3.

Sole Proprietorship.  A sole proprietorship is not a separate legal entity; it is a business owned and run by one individual and in which there is no legal distinction between the owner and the business.  The business’s income or loss is calculated and reported by the owner on his or her individual income tax return, combining it with any other income or losses the owner might have.  This is true at the federal and Illinois level.  An interesting side note:  there has been a gradual trend towards using independent contractors, instead of employees, to perform some types of work.  As a result, what was formerly characterized as wage income is now, in some instances, paid to a sole proprietorship and characterized as business income.

Partnership.  A partnership is a relationship between two or more persons (individuals or corporations or other partnerships) who join forces to carry on a trade or business.  Partnerships file annual informational returns with the IRS but do not pay income tax. Instead, each partner pays tax on its share of the partnership’s taxable income.  For this reason, partnerships are referred to as “pass-through” or “flow-through” entities.  Illinois follows the federal treatment of partnerships, subjecting the partners rather than the partnership to the regular income tax, with one significant (and unique-to-Illinois) difference: the partnership also owes PPRT as a separate entity.

Corporation. A corporation is a separate legal entity formed under state law.  Many corporations are subject to the corporate income tax, for both Illinois and federal purposes.  In Illinois, corporations also pay PPRT.  When a corporation pays dividends to its shareholders, the shareholders include that dividend income in their tax base, and pay tax accordingly. (In other words, if there is no relevant deduction, that income is taxed twice, at the entity and shareholder level.)

If a corporation meets certain requirements it can elect to be taxed under Subchapter S of the Internal Revenue Code.  An “S corporation” becomes a pass-through entity, similar to a partnership: there is no entity-level taxation and the individual shareholders include their distributive share of corporate profits, losses, etc. on their own returns.  Illinois, like most states, respects the federal S corporation election, but as with partnerships, also subjects the S Corporation to entity-level PPRT.  (Corporations that do not make the S election are sometimes called “C Corporations” because they pay tax pursuant to Subchapter C of the Internal Revenue Code.)

Limited Liability Company.  A limited liability company, or LLC, is a legal entity that can be taxed like any of the other entity types, depending on the number and nature of owners and the elections filed with the IRS.  Illinois follows the federal characterization of LLCs, and the discussions herein of sole proprietorships, partnerships, C corporations and S corporations apply to LLCs falling into those classifications. 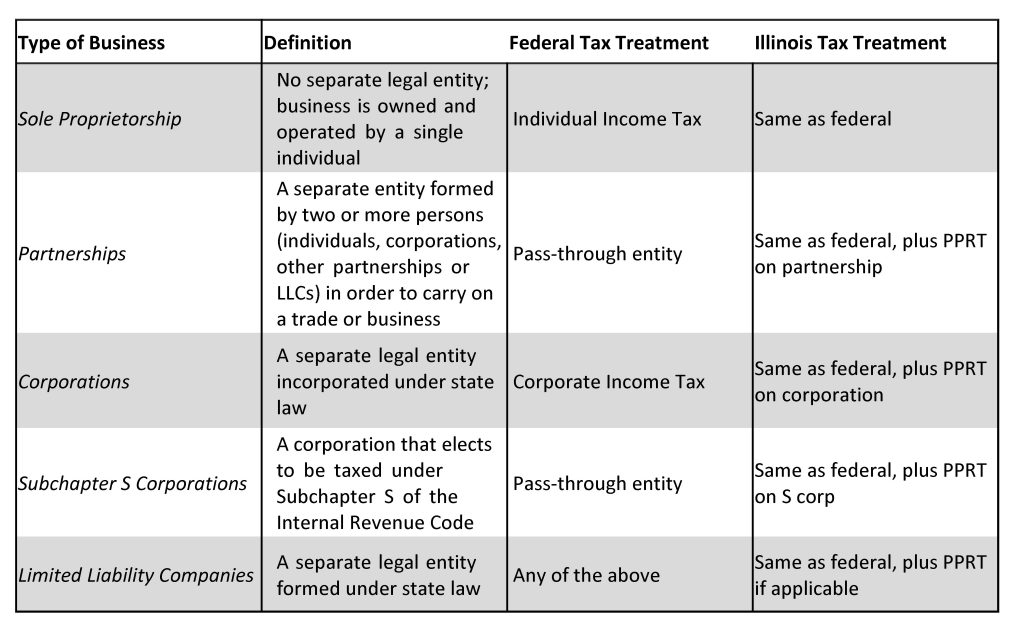 Entity choices have changed over the years
Given the double taxation that occurs when dividends are taxed and the traditionally higher federal and state corporate income tax rates, businesses have increasingly organized in forms other than C corporations, as shown in the chart below. 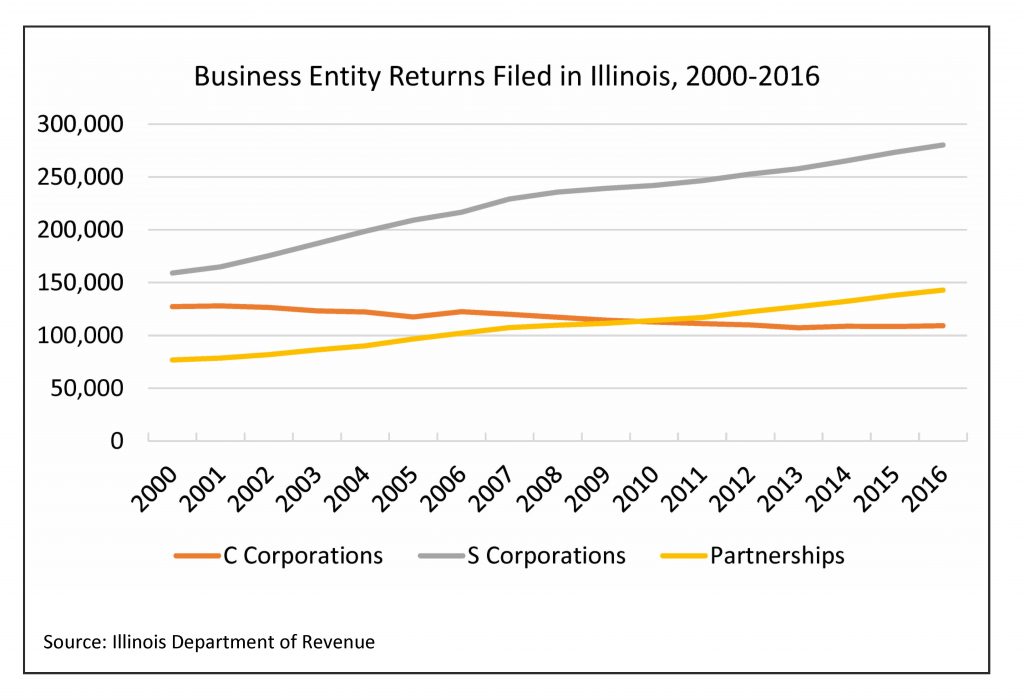 First, a word about taxable income: For Illinois and most states, the starting point in calculating state income tax liability is the business’s federal taxable income.  This is generally the business’s net income, after deductions for business expenses have been taken. (For individuals, the starting point is federal adjusted gross income, and most personal expenses are not deductible).  Illinois is considered a “rolling conformity” state, meaning changes to the Internal Revenue Code’s tax base provisions are automatically incorporated into Illinois’ tax base as well.  Illinois requires a number of adjustments, decoupling from certain federal provisions like bonus depreciation, sometimes replacing them with our own alternative (in the case of depreciation, for example) and sometimes making adjustments to compensate for odd mis-matches or to avoid unconstitutional results (in the case of the foreign dividends received deduction, for example).  The nuances of calculating Illinois taxable income are outside the scope of this article, so we return to the two issues unique to multistate businesses:  nexus and apportionment.

Nexus. If a business’s presence in a state is significant enough that the state can tax the business, it is said to have nexus in that state.  Income tax nexus standards vary from state to state, and there are federal constitutional and statutory nexus limitations as well.  Broadly speaking, though, a business has nexus in Illinois (and therefore must file an Illinois income tax return) if it has employees or assets in the state, or makes more than a de minimis level of sales to Illinois customers.

Apportionment. Multistate businesses are naturally subject to income tax in multiple states.  It wouldn’t be fair (or constitutional) for each of those states to tax 100% of every business’ income.  The process of determining how much of a business’ income is taxable by a particular state is called apportionment.  Apportionment methods vary by state, despite repeated efforts at standardization.  The most significant such effort, in the 1950’s, resulted in the Uniform Laws Commission adopting the Uniform Division of Income for Tax Purposes Act (“UDITPA”). UDITPA sets forth a three factor apportionment formula which gives equal weight to each of the following:

The following examples illustrate how apportionment is calculated and the impact of using different formulas.

Example 1 – Company A had 50% of its property in Illinois, 50% of its payroll in Illinois and 20% of its sales in Illinois.  Its Illinois apportionment (and therefore the percentage of its taxable income subject to Illinois tax) would be as follows:

The single sales factor apportionment method is often considered an economic development tool:  businesses increasing their in-state presence through new investment and employees will see no increase in their income tax liability.  According to the Federation of Tax Administrators, of the 36 states with an income tax, 25 now apportion business income using the single sales factor.

Organizations with Multiple Subsidiaries: Adding another layer of complexity
Frequently, medium and large businesses operate through several different legal entities.  This can be for any of a number of reasons, from regulatory requirements to a legacy of growth through mergers and acquisitions.  States differ in their approaches to taxing these groups of related entities.  Some states use “combined reporting”, which requires a multi-state business to combine the profits and losses (and other tax attributes) of all of its related entities onto a single tax return.  Others use “separate accounting”, where each entity is taxed independently. Illinois requires combined reporting of related entities that have a unitary relationship.

How Much Income Tax do Illinois Businesses Pay?
It seems to be a fairly simple question: how much  of  Illinois’ income  tax is paid  by  businesses?  There is not a  simple answer, unfortunately.

For fiscal year 2019, the Office of the Illinois Comptroller has reported the following in income tax collections:

As described above, Illinois’ individual income tax calculations start with federal Adjusted Gross Income, or AGI, a number that includes many sources of income, including salary, wages, interest, dividends, pensions, and business income from partnerships, S corporations, and sole proprietorships.  In other words, we cannot look to Illinois data for our answer, because all of that income is lumped together.  Fortunately, in its Statistics of Income publication the Internal Revenue Service reports the categories of income included in federal AGI for returns from Illinois, and we can use that information to estimate how much Illinois individual income tax those taxpayers paid was attributable to business income:

Based on these assumptions, we can estimate the total amount of income tax paid on business income as follows: 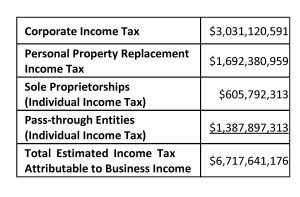 * President of the Taxpayers’ Federation of Illinois since January 2013, Carol Portman has been working the state and local tax arena for over two decades.